Claiming Their Maiden by Sue Lyndon 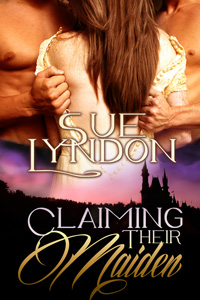 Despite growing up as a nearly friendless orphan, Amelia had managed to carve out a meager existence. Then, without warning, Amelia found herself falsely accused of a terrible crime and forced to flee for her life into the vast, dangerous forest outside her village. Alone, terrified, and pursued by both man and beast, the end seemed near for Amelia… until she fell from a tree into the arms of a towering hulk of a man and fainted in panic.

She is pleasantly surprised to awaken in a warm, soft bed in an ancient castle deep in the forest, and she is even more surprised when she learns that her rescuer, Trent, and his brother, Gavin, are the lords of this castle, but the truly shocking revelation comes when the barbarian brothers inform her that she has been promised to them by the Goddess and that she is to be their wife.

Like all men of their kind, Trent and Gavin were born as twin brothers, and the magic of their people will bind them forever to their chosen mate. With the promise of the Goddess backed up by fierce desire for the beautiful Amelia, both brothers are delighted to claim this unspoiled maiden as their own. The brothers are fully prepared to teach their new bride obedience, and they know that nothing will impart that lesson better than a good, hard spanking on her bare bottom.

Amelia wants to hate Trent and Gavin with every fiber of her being, but their firm discipline is coupled with kindness, concern, and a deep and powerful love that she never imagined she would experience from any man, let alone two great warriors who are both so handsome it nearly takes her breath away. Though it fills her with shame, when the time comes for them to claim their beautiful new wife—each in turn and then both at once—she cannot help but yearn to be taken long and hard.

Oh, no. She was over his knee, and he meant to spank her.

“You’re feisty,” he said, wrangling her wrists together, until he had her hands pinned at the small of her back. “I like that.”

“Well, I don’t like you!” It was a childish thing to say, but it was all she could come up with under the circumstances.

His hand came down, slapping her ass with an impact that stunned her. Even through her drawers and the nightdress, she felt the full sting of the blow. He gave her a dozen more slaps in this fashion, and she kicked her legs and tried to slide to the floor. Beneath her stomach, his organ swelled harder. Larger. She kept kicking, wanting to escape his punishing hand and the hard evidence of his arousal. What a beast he was to become aroused as he chastised her, and so unfairly at that.

“You will apologize to my brother in the morning, sweetling. We might seem a bit barbaric to you, but we aren’t so uncivilized and disrespectful as to slap you in the face, and we expect the same propriety from you.”

“You can shove your propriety up your ass!” she screamed, unable to hold her tongue. Her whole life, people had mostly avoided her due to her smart mouth. She was sweet when it suited her, and sour and spiteful when it suited her as well. A personality for each situation. She should’ve been born in a larger village with more culture, or perhaps a city far away, and she could’ve been a fine actress. Instead, she’d grown up as an orphan in a poor village cut off from all other villages, an outcaste among outcastes. Lonely among the lonely.

Heat seared her bottom, and the stinging blows didn’t cease falling. Gavin spanked her thoroughly, pelting both her cheeks from top to bottom, and the pain soon caused tears to prick in her eyes. The instant she felt moisture on her face, her tears finally falling, she hated him all the more. Despite her increasing hatred, she didn’t have the energy to keep squirming. She was exhausted, spent from the ordeal of her trek through the forest, almost dying, and then waking up the captive of two strangers—Banded Men who thought she was a gift from the Goddess.

Her tears began to flow freely, and she buried her face in the clean, soft bedcovers. She’d stopped thrashing her legs, and now she simply hoped Gavin would take pity on her and end her punishment. No one had ever spanked her before. She’d been slapped in the face plenty, pushed around, and even kicked a few times, but never spanked. It was horrible, but at the same time different than all the other physical hurts she’d suffered through. This one hurt her heart the most, and she wasn’t sure why. Was it because he meant to teach her a lesson in manners?

2013-08-06
+admin
Previous: Safe in His Arms by Renee Rose
Next: Being Their Baby by Korey Mae Johnson