Claiming Their Princess by Sue Lyndon 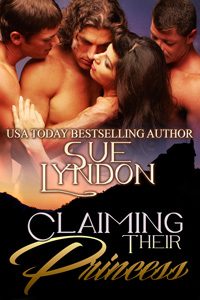 Though she was born a princess, Laina’s life has been anything but a fairy tale. Orphaned at a young age, she was raised by one of the Banded Men, a race of huge, fearsome warriors often considered barbarians in the days before the collapse of human civilization. But with her aging adopted father nearing the end of his days, she will need to find a place for herself in the world.

Upon returning home after years away at war, the first thing Randall, Hadden, and Aron have on their minds is finding a mate. When the three battle-hardened brothers see that Laina—the human girl their uncle took in as a child—has grown into a beautiful woman, they quickly decide to claim her as their bride.

Among the Banded Men, a woman is not asked her opinion before she is taken as a wife, and Laina is shocked to discover that her new husbands will not hesitate to punish her bottom both inside and out if she defies them. But her passion is set ablaze as the handsome warriors each take their turn to claim her, and though the very idea leaves her blushing, she soon finds herself longing for the moment when she will be made to surrender her body to all three of them at once.

Publisher’s Note: Claiming Their Princess is a stand-alone book set in the same world as Claiming Their Maiden. It includes spankings and sexual scenes. If such material offends you, please don’t buy this book.

“Little princesses who are defiant get spanked on their bare bottoms, don’t they, Laina?”

He wasn’t surprised when she didn’t answer. In an attempt to reach her, he forced her legs wider apart, revealing her plump, swollen sex. He grinned at the sight and ran a finger down the slit of her gleaming pink pussy.

“You’re being punished right now, Laina, but you’re getting very wet. That’s awfully naughty of you.”

Finally, she made a noise. A whimper. She buried her face against his leg, obviously embarrassed by her body’s reaction to his discipline.

“I’m going to give you a dozen more spanks to the most sensitive part of your little backside. Right here,” he said, now caressing her sit spot. “After that, if you still refuse to tell me why you’ve been a bit naughty lately, and why you intentionally broke a rule today, I will punish your bottom hole.”

That got her attention. She peered over her shoulder and met his gaze, her eyes wider than ever. Pure shock covered her face. “What do you mean? H-how?”

He lifted an eyebrow at her. “I will coat one finger with the wetness from your cunny,” he said, drawing a digit through her still gathering moisture, “then I will push into your tight bottom hole with that finger and pump it in and out of you.”

She paled, but still said nothing.

“Bottom hole punishments are very effective in getting naughty little girls to behave.” He splayed her reddened cheeks apart, exposing her quivering rosebud, then tapped at the shy, puckered flesh for a moment before releasing her cheeks and placing his hand back atop her sit spot. “Is that what you want, Laina? Do you want me to put my finger inside your naughty bottom hole and pump it in and out of you, after I’ve given you a sound spanking?”

“Please don’t,” she whimpered, shaking her head. “Please, I’ll tell you why I’ve been testing you and your brothers.”

“Ah, so you have been testing us.” He had suspected as much, but he wanted to hear the reason for her recent behavior in her own words.

He turned her over in his lap, sitting her upright, though not bothering to close up her drawers. She sat upon his knee on her bare bottom, her rumbled skirts still pushed up around her waist. He still owed her those last twelve smacks, but he could just as well deliver them after her confession.