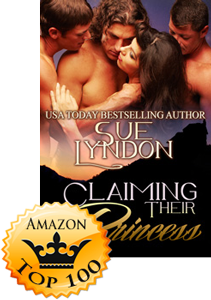 ★★★★★ Bookworm 555 @ Amazon.com “Loved this story” on December 17, 2016
I really loved this book (it is way better than the first book – Claiming Their Maiden). I love the concept of the Banded (twins – one of the light and one of the dark – so that their mate is always protected). The first half of the book was really an emotional read. Between Randall’s story and Laina’s background, and Benjin’s future, it was really hard to see my ereader through the tears. The author does a fantastic job drawing you into the story and making you care about what happens to these characters. The story is not that long but it is detailed enough to give a complete tale that is entertaining. I could not put it down. I would definitely recommend reading this book.

I received a copy from the author and voluntarily reviewed this book. I have also borrowed many of the author’s books through Kindle Unlimited and bought others.

★★★★★ Valeria Martius @ Amazon.com “Another winner!” on December 18, 2016
I really enjoyed this book—I am often a bit wary of space/alien themed books, because having to remember all of the terms and different meanings, etc, takes me out of what isn’t my favorite genre to begin with—-so I thought this was especially well done because

a) it had an “alien” race i.e. the Banded, that was explained in a very straight forward, not confusing way……….

b) terminology needed was kept to a minimum, and explained within the context of the story

Those are the things that always COMPLETELY throw me off……

I liked the idea that while the heroine was expecting to be mated/claimed……………as it was a culture that she had grown up with all her life (I HATE when a hero/heroine acts like they are ignorant of something they have grown up with all their lives)……….but she was still resistant due to other factors. It was very realistic, and it brought some drama/angst to the story.

Last but not least–the sex was hot. That is a given. I read the preclude to the three-way scene at least three times before I even made it to the sex, because it was that hot.

★★★★★ Renee @ Amazon.com “Banded men plus one equals a really hot story” on December 18, 2016
This was a great story. This book contained a wealth of elements that really impressed me. For example, the use of the Banded men is an uncommon story line and then the addition of the third was a great twist. I enjoyed reading about them. I have only seen them as characters in one other book. The story was a real page turner. The interactions between the characters was hot and really heats up the page.

★★★★★ kristen harbach @ Amazon.com “Great Story” on December 22, 2016
This story did a great twist on fantasy and sci-fi. Also if you are looking for an RH story, this is a good one to check out. even if it is short.

★★★★★ Elizabeth @ Amazon.com “Another amazing page turner” on December 18, 2016
I loved this book! The characters were engaging and had me interested from page one. I had such a hard time putting it down. Stern and Sexy perfection!