Claiming Their Slave by Sue Lyndon 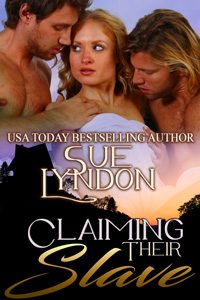 Though she dreamed for years of escaping her cruel master, Ava never expected that when she finally left her village it would be in the company of a huge, roughly-handsome barbarian who just purchased her at auction. Despite his stern demeanor and his promise to spank her for any misbehavior, however, her new owner’s firm-handed dominance arouses her deeply.

Jaxon has no intention of keeping Ava as a mere slave, but a human girl would not be safe on her own, and when she attempts to run away he takes her over his knee for a painful, humiliating chastisement. The fact that his strict correction leaves her soaking wet and quivering with need confirms that she will be a suitable mate, and before long she is writhing in ecstasy as she is brought to a helpless, blushing climax over his lap.

Upon arriving at the home shared by Jaxon and his brother, Ava is informed that the two battle-hardened warriors plan to claim her as their shared bride. Her mates make it clear that they will expect her complete submission and will not hesitate to punish her as thoroughly and shamefully as necessary to teach her obedience, but in spite of everything, will she soon find herself longing for the moment when they will claim her completely?

Publisher’s Note: Claiming Their Slave is a stand-alone book which is the third entry in the Barbarian Mates series. It includes spankings and sexual scenes. If such material offends you, please don’t buy this book.

“It was quite naughty of you to run away, little human. Now you’re over your master’s knee, about to get a hard spanking on your bare bottom, aren’t you?”

“I want you to be a good girl and accept this punishment. You deserve every smack I plan to give you, and you’ll be very sore once your spanking is over. I imagine this cute little behind of yours will be a bright shade of pink by the time I’m finished.”

She tried to reply with another yes, Master, but her voice became stuck in her dry throat. She instead lowered her head and braced herself for the onslaught of blows. If he hurt her especially badly, perhaps she would be able to finally summon hatred for him, or even a small amount of dislike. But she secretly hoped he only took her to the edge of tolerance, then stopped and told her all was forgiven. She hated that she’d displeased him and desperately wanted to be back in his good graces. Odd, she never thought she’d care so much about pleasing a master.

The first swat landed, and she gasped at the sudden sting. Before she had time to catch her breath, his flattened palm struck her again. He spanked her quickly, alternating cheeks as he punished. Shame made her go hot all over. She was squirming slightly, which probably gave him a better view of the area between her thighs. She tried very hard to stay completely still, but it was difficult not to flinch with each rapid impact of his hand to her flaming behind.

The sting spread, rapidly so, the pain coalescing with the desire that throbbed deep within her womanly core. Jaxon left no area of her bottom unpunished, and he even laid into the tops of her thighs, as well as the spot of sensitive flesh where her buttocks and thighs met. Oh, the pain. She soon gave up trying not to cry, letting her tears flow freely. She sniffled and sobbed harder, truly repentant for having disobeyed her new master. She could have at least given him a chance before running off like she had.

Now he wouldn’t trust her. Even if he did turn out to be a cruel master, he likely wouldn’t allow her the chance to escape. He would probably put the leash around her neck and drag her back to his homestead. He would probably tie her up at night to keep her from running off again. Her heart ached, because as much as she wanted an excuse to hate him, finding out he had a cruel streak would leave her gutted.

Her tears fell faster and her chest heaved with her sobs. Maybe she should hold off on judging Jaxon. Thus far, he had proven himself different from all the other masters in her village.

Finally, he ceased spanking her. But he didn’t immediately allow her to get up. Instead, he held her in place over his knee and rubbed her seared bottom cheeks. As her cries abated and she calmed down further and further, she became aware of his hands moving closer to her cunny.

She froze, but didn’t try to clamp her thighs together.

He drew one finger along her intimate folds, and she shuddered and arched herself into his touch. She couldn’t help it.

“I know you are wet and aching here, Ava. Do you want me to help you feel better?”

She peered over her shoulder at him, considering. His gaze, still stern, made her aching deepen all the more.