Claiming Their Slave Takes Ownership of a Top 100 Spot 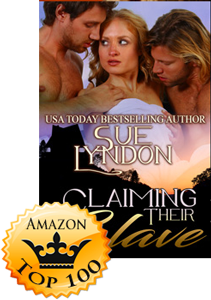 Sue Lyndon’s new book, Claiming Their Slave, has made the Top 100 in the Fantasy Romance category on Amazon! Congratulations, Sue!

★★★★★ Jessica N @ Amazon.com “Will Ava find her freedom while belonging to Jaxon and Wolfe?” on September 30, 2017
Claiming their Slave is the engaging third Barbarian Mates book, but can be read entirely as a stand-alone. Ava is a slave who dreams of her freedom. Jaxon is a Banded brother who rarely interacts with humans, but something drew him to buy Ava. But he doesn’t want to keep her as a slave, but as something so much more. He just needs his brothers approval. How will Ava respond to Jaxon and Wolfe’s dominance? Will she still yearn for freedom or will she feel a connection to the brothers?

I was so drawn into this book! Ms. Lyndon is a master of words and I loved the interactions between Ava, Jaxon, and Wolfe! Ava realizes that she wants more than just her freedom, something that Jaxon and Wolfe are able to give her. Jaxon and Wolfe are two sides of the same coin, one dark, one light, but Ava really completes them. I haven’t read the first two books in the series, but I loved the world that Ms. Lyndon created! The humans were definitely dark and I loved that Ava was able to find exactly what she was looking for in her two dominant, strong, possessive, and loving men.

I received an advanced reader copy of this book to voluntarily provide an honest review and I loved this book! It’s magical in that it makes me believe in the world and the love of the Bonded men and I was simply captivated by the story. I would recommend this book if you’re a romance lover and I’m off to go read the first two books, too!

★★★★★ Mozzy @ Amazon.com “This is the third book in the branded men series …” on September 30, 2017
This is the third book in the branded men series. And what a lovely book it was as well. This book tells of Ava who has been a slave most of her life, All she wants to do is to runaway away from her horrid master, but before she gets the chance to do that her master discovers her plan and takes her to the market to sell her. She is is brought by Jaxon a branded man who tell her she is now his slave, she is taken back to his house to meet his other brother. The branded brothers are Jaxon and Wolfe, they are twins Jaxon is the day twin whereas Wolfe is the night twin, they both know that Ava is theres and before they claim her she has to be punished and learn that if she is naughty and dosnt follow orders this is what will happen.

★★★★★ Sue B @ Amazon.com “Ava has grown up as a slave, her owner and his son are cruel her dreams of escape and becoming free keep her determined” on October 2, 2017
Ava has lived in her village as a slave her whole life, her mother was also a slave and when she was born she automatically belonged to the same owner, who could sell her or breed her so that her children when old enough could be sold to new owners. It was a desperate life.

All her life she dreamed of running across the field of daises which was out of bounds and then running away into the forest to escape to freedom. In the village the forest was dark and there were dangerous animals and spiders….

On the day that she was being auctioned a Banded Man walked through the village and looking on with disgust he purchased her and took her back to his home, Jaxon was the Banded Light Brother and Wolfe was the Banded Dark they were both kind and had dreamed of a beautiful blond human becoming their mate. After bonding the brothers would each gain special senses that allowed them to protect their bride but too pair the gifts could be varied and equally as miraculous.

This was a wonderful third story in this third book of the Barbarian Mates, the characters were strong and well written and the situation was very descriptive. This was a great read once I started it was impossible to put the book down until I knew the final outcome, it was a story that had lots of surprises I recommend it to other readers. I enjoyed the book and look forward to reading any future publications; keep up all the great writing.

2017-10-07
Chris
Previous: Under His Control by Stella Blanche
Next: Cowboy Daddies Rustles Up a Top 100 Spot