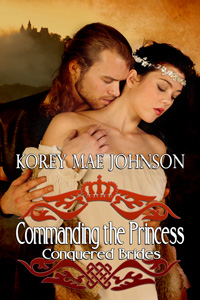 As the ruler of her lands in name only, Princess Susanna has watched helplessly for years as her power-hungry uncle made enemy after enemy on her behalf. One foe stands out, and the moment she catches sight of him, Susanna is certain that it will be Gerhard of Bavaria who brings her world down around her.

As his army smashes through her gates, Susanna makes the only choice she has left. She surrenders herself to Gerhard, hoping to win mercy for her people, though she fears it will come at the cost of her life. But she soon learns that Gerhard has other plans for her, plans which may end with her surrendering much more than just her castle to him.

Publisher’s Note: Commanding the Princess contains spankings, sexual scenes, and more. If such material offends you, please don’t buy this book. This book is also available as part of a five-book collection entitled The Conquered Brides.

He ended the kiss and then guided her body over his knees. He smoothed his hand across her thighs and bottom, drinking in his fill of the beautiful sight. He had been in the company of many females before Susanna, but at the moment he couldn’t remember what any of them looked like. He was more certain than he’d ever been about anything that she had the finest ass in Christendom.

“What is my beautiful sweeting going to do from now on when I tell her to do something?” he asked her, squeezing one of her still-pale globes.

After a moment of silence during which she hummed and searched for an answer, he prompted, “Are you going to obey me?”

“Because I would never order you to do something without it being important to your safety, my love. Never. You are my best treasure; I wouldn’t break you. I like you stubborn and wild as you are.” He found himself grinning for a moment, but then he remembered that the reason they were in this position was because she had been almost eaten by wolves. Recalling that was beyond sobering.

“But when I tell you to do something,” he began to lecture, bringing the leather up above her bottom and then bringing it down with a loud, deafening crack. Her whole body flinched. “Then you—” he struck again, “will,” and again and again, “obey me!”

She kicked her legs out, but she hadn’t wailed. It sounded from her grunting like she was trying to grit her teeth to keep from crying. Unfortunately, her crying was the entire point. He began to slap the leather down across her tender flanks in earnest, not leaving an inch of flesh untouched from the middle of her milky thighs to the top of the cleft of her ass. She began to try to fight him and the pain, but he easily subdued her, clamping her knees behind one of his own and then hoisting her bottom up even higher.

He didn’t have much space to swing the strap in this position, but he wanted to be able to aim without worry of hurting the exposed, puffy lips of her sex, and he wanted the intimacy of having her close to his body through this. In any case, her backside was quickly turning a delicious shade of red.