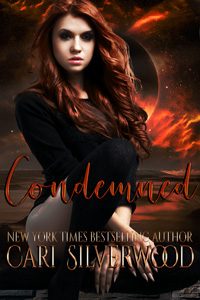 She owes them her life. She’ll pay with her body.

After she is caught trying to steal an artifact from an alien temple, Avalon is saved from a terrible fate by four veteran warriors, but the battle-scarred brutes make it clear they have no intention of setting her free. She belongs to them now, and one after the other they bring her roughly to heel, using and enjoying her beautiful body as thoroughly and as often as they please.

Though their plan to rescue her goes smoothly, Avalon remains distrustful of these alien beasts, and her efforts to escape them soon earn her a painful, humiliating punishment. Despite her shame, she cannot hide her response to their touch, and before long she is screaming with pleasure as she is brought to climax again and again by acts she’d never thought she could enjoy.

Over the coming days, Avalon’s captors become her protectors, but will they be able to keep her safe when her life is threatened by the man who sent her to steal the artifact in the first place?

Publisher’s Note: Condemned is set in the same world as Ruled, but it is a stand-alone novel. It includes spankings and rough, intense sexual scenes. If such material offends you, please don’t buy this book.

“Pull your leggings down and bend over that log.”

Wide-eyed, she regarded the log then Takk. “Ummm. Why?”

He dragged off his gloves and tucked them into his belt before he answered. “You don’t ask me why. Not unless you want extra punishment.”

Fuck. Only scowling slightly, as in for about one millisecond, she trudged to the log, shuffled down her leggings to just below the crease of her butt. At the raising of his eyebrow, Avalon sighed and pulled them lower, to below knee level. When he nodded, she leaned over the log and found a spot on the ground to place her palms that wasn’t covered in small stones.

Then, curse the stars above, she noticed the other mauleons gathering, chuckling at her predicament.

“Checking her ass end for treachery too now, Takk?” Timin was full of smart comments today. She sent him a baleful glare. He only laughed louder. “If you could see what’s coming, girl. Just so you know, sir, she doesn’t look too cowed.”

“Figures. This is for your insolence and to remind you that you’re ours to do with as we please to. Don’t clench or this will feel worse.”

What was he doing? Worried, she tried to look over her shoulder, but Zo had crouched on the other side of the log and he’d grabbed her hair and held her in place.

She felt Takk pull apart the cheeks of her ass and something huge, wet, and slippery delve between them, clearly aiming at the hole there.

“Things should not go there!” she hissed, wriggling, even though she knew he’d smack her for it.

A second later a stinging blow landed on one cheek. “Don’t move, unless you want to be gagged, hog-tied, and maybe whatever else Timin can think up.” If that wasn’t Takk being annoyed and angry she didn’t know what was. “Head down. Be still. This is a butt plug. Once in, it won’t come out until I remove it. The better you behave, the less likely I will use it tomorrow.”

Timin, from his grin, would have far worse inserted in her.

Giving in was inevitable, so… she did.

Zo was front and center, observing her as the plug traveled deeper, stretching her ass in ways it should not be stretched.

She closed her eyes to lessen the embarrassment, only swearing quietly and whining once.

“Almost there,” Timin observed. “Whoa, that plug is fucking enormous.”

She stiffened and felt her muscles push the plug outward.

“I’m trying,” she said in a whisper, and as she did so the whole feeling of this situation morphed. Four males were watching her ass be violated and suddenly it was hot, and she knew this was arousing her, and she really wished it wasn’t. If Takk probed between her legs he’d know how wet she’d become.

The plug slipped deeper then Takk gave it one last push. She felt the flinch of the ring of muscle and squeaked, dug her claws into the earth.

Struggling to control her panting, she opened her eyes and looked, twisting her lips, as if to say that was disgusting.

“You liked that.” His words were almost a purr.

2019-07-27
Chris
Previous: His as Payment: A Dark Mafia Romance by Piper Stone
Next: Reclaiming Emma by Isabella Laase