Congratulations to A Knight’s Prisoner!

Stormy Night Publications is so happy to announce that The Knight’s Prisoner by Renee Rose is, at this moment, on the Top 100 list of Erotica at Amazon, the world’s #1 Largest Bookseller! Congratulations to Renee Rose!

Here’s what some people are saying about The Knight’s Prisoner this month: 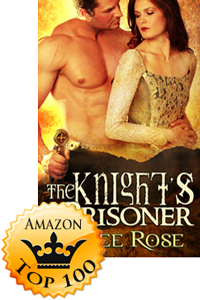 Another amazing story by Renee Rose. Five stars hands down for the plot, interaction, and originality.

This was a very busy tale with lots of things going on in the plot and subplot though I could not connect with Sir Ferrum. I did not like the way he treated Dani, some of the spankings seemed not to fit the crime. Our lovely former prostitute is so tough on the outside and can detach for her job so it seemed that he really needed to lay into her to punish. I know that he was hard on himself due to his scars and being a very large man but I thought he could be more tender.

I did find it hard to really focus on Dani due to the cover image. It may just be me, but she was described as a Saxon with long, light blond hair in detail so much so that I felt the cover photo gave you an image that you couldn’t help but keep in mind while reading. Very lovely cover, the hair could have been lightened and done wonders to keep her true to the way she was painted.

This story was fantastic! I appreciated the length and the depth of the plot. Wonderful characters that I would love to see again in a sequel! Once I started reading I could not put it down, I just had to see what was going to happen next. Great read and one I will definitely read again!!

Very good historical (think King Arthur and Camelot) about a whore who is actually a seer and a huge scarred man in service to the hopeful King. I enjoyed both the characters and found their dynamic interesting. There was a bit of switching who was in control to illustrate a concept and it was very effective. They both have to think about not being perfect people and what that means including how they view themselves and each other. The capture scenario was pretty hot and boy did he punish. That man was relentless. Of course she loved it (this is romance after all) even when she hated it. Spanking was hot hot hot. The story has a real plot and there are political machinations happening that keep all characters in their grip. Really though it is what happens between two people here that is front and center. Dani is so conflicted that she fights things and Ferrum does not know what to make of her. They stick with what they have in common which is more than superficial – and it makes for a very enjoyable read. I wish there was more historical stories like this one!