Conquered by the Viking by Ashe Barker 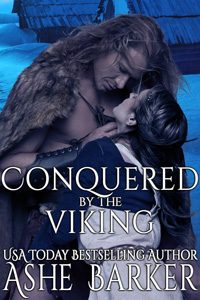 Eighteen-year-old orphan Merewyn has seen enough of Vikings to know she hates them, so she is furious when a band of shipwrecked Norsemen force their way into her home. Despite her best efforts to drive them away, their leader makes it clear they intend to stay for the winter. To her surprise, he also takes an interest in her well-being, and when Merewyn attempts to run off and fend for herself the battle-hardened warrior strips her bare for a painful, humiliating switching.

Despite his willingness to chastise her so shamefully, Merewyn cannot deny that these men are not the savage barbarians she expected, and she does not object when the huge, handsome brute who so recently punished her takes her in his arms and claims her hard and thoroughly. As the weeks pass, Merewyn’s uninvited guest masters both her body and her heart ever more completely, but does he plan to truly make her his or will she be left behind when he sails home?

Publisher’s Note: Conquered by the Viking includes spankings and sexual scenes. If such material offends you, please don’t buy this book.

She emitted a little sob as she leaned properly forward, her rounded buttocks now raised and presented for his attention. Still Mathios was not satisfied. He gently laid his hand between her shoulder blades and pressed her upper body until she sank lower.

“Hold on to the post, hug it if you wish, and spread your legs for balance.” He stood back in order to properly assess her position. “Yes, that will do. I have no wish to tie you to the post as that would be less comfortable for you, but I will do so if need be. I require you to remain still, in that exact position, until I tell you that you may move. Is that quite clear?”

“Then you may tell me when you are ready for me to start.”

She closed her eyes and flattened her lips against her teeth. Mathios selected a switch from the bucket where several had been prepared and left to soak for his use. He examined the slender branch and was satisfied it would meet his requirements admirably. Olav had done well. He shook the droplets of water from the smooth branch and cast an appreciative glance over Merewyn’s upturned, clenching buttocks as he did so. His little Celt really did have the most delightful arse, made for spanking.

“Merewyn? Are you ready?”

She managed a swift nod and tightened her death-like grip on the post.

The first stroke was relatively light, but still she let out a sharp hiss and went up on her toes. He had known she would. Mathios allowed her a few seconds to regather her senses before he laid the next stripe across her other cheek. Two pretty, crimson streaks now adorned her creamy flesh.

The next half dozen or so were delivered in rapid succession. Merewyn jerked and cried out with each one, but she held her position perfectly. He was proud of her resilience. Now it was time to become serious.

Mathios applied more weight as he continued to strike her perfect, peachy arse with the switch. The branch became frayed so he discarded it and selected a fresh one. Merewyn groaned, she was sobbing now, her cries more shrill as each spank fell. Red wheals crisscrossed her buttocks and he paused to lay his palm over them. The flesh was already starting to swell, he felt the heat rising from her punished skin. He curled his fingers to press harder and she cried out.

“I will touch you as I see fit during your punishment. Your body is mine, to do with as I please.”

There was no further protest from Merewyn. He caressed her bottom, his touch gentle. He continued until she stopped wriggling and remained motionless under his hand. It did not escape his notice either that her pretty cunny glistened with her juices. He had no doubt at all that he was hurting her, but her arousal was undeniable. Such were the vagaries of feminine sensuality, and Mathios for one had no complaints.

He resumed his stance to continue the switching. Merewyn stiffened but did not shift.

The next few spanks were hard and sharp. She screamed with each one and panted between the strokes. Her pussy swelled, her juices pooled and dampened her inner thighs, her bottom glowed a beautiful bright red. Mathios required yet another fresh switch in order to continue.

By the time he had ruined the fourth switch Merewyn’s cries had become hoarse, her voice cracking under the strain. She no longer clenched her bottom in anticipation of each stroke. She had ceased to fight the agony of her punishment. Rather she relaxed, allowed the pain to flow through her body and surrendered fully to his discipline.