Conquering His Captive by Ivy Barrett 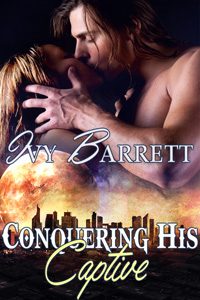 Three years ago, nanobiologist Cassie Myer was tricked into helping an enemy of her planet’s government complete an important mission. When she is suddenly contacted again by the same handsome, boldly dominant seducer, she promises herself that she will not fall for his charms a second time, even after he rescues her from an even more dangerous adversary.

Fane has loved Cassie since the day he met her, but loyalty to his cause has kept him from claiming her… until now. With her unique skills in urgent need among his people, he is left with no choice but to compel her cooperation, even if that means stripping her bare, spanking her thoroughly, and then teasing her beautiful, naked body until helpless, desperate arousal forces her to surrender completely. But will Cassie stay by his side once she is no longer his captive?

Publisher’s Note: Conquering His Captive is the third book of the Captives of Stilox series. It includes spankings and sexual scenes. If such material offends you, please don’t buy this book. Also note that an earlier version of this book was previously released by another publisher with the title Sorcerer.

Reluctance hindering each step, she crossed to the bed and visualized the position he’d requested, so vulnerable, so open. “Fane, I really don’t want—”

He slapped her bottom with his open hand and a gasp interrupted her plea. The sting was momentary, but heat crawled across her skin and sank slowly into her muscles. “‘Companionship and comfort,’” he quoted. “You promised willingness for protection. Are you reneging on our deal already?”

“Prove it. If you’re offended by ‘doggy-style,’ then bend over the bed and spread your legs.”

“As if that’s any better.” Her voice sounded almost shrill.

Fast as lightning, he grabbed the back of her neck and pushed her down across the bed. Her hands came up automatically, so she ended up bent at the waist with her forearms resting on the bed. He moved behind her and kicked her feet apart.

Each aggressive movement angered her more, but she knew better than objecting. Most of their past encounters had been playful and hot. This was clearly discipline triggered by her reluctance. Arguing at this point would only make things worse.

He delivered two firm spanks to each side of her bottom and she clenched her teeth, trying not to react to the humiliating situation. She didn’t want to give him the satisfaction of crying out.

“Why am I spanking you?”

“Because you’re a sadistic pig.” The insult was out before she could stop the impulse.

A flurry of fast, hard swats was his only reply. The pain increased as his hand landed on areas already tender from previous slaps. She clawed at the bedding and clenched the muscles in her butt, doubly upset because she’d brought it on herself.

“Relax,” he directed. “It hurts worse when you tense up like that.”

She tried to obey, but her body simply wouldn’t cooperate. He spanked her again and a cry tore from her throat. Soon she cried out with each punishing stroke, which only added to her humiliation.

“What did you do wrong?” His tone was much more autocratic when he finally paused to speak.

Tension banded her chest and tears gathered in her eyes. A confusing combination of emotions twisted inside her: anger, humiliation, even fear. She knew Fane wouldn’t hurt her badly, but something menacing and powerful loomed in the distance threatening to shatter her emotional defenses.

“I need to obey you.” Her voice sounded so raw she barely recognized it as hers and hot tears spilled onto her cheeks.

The question surprised her. It was hard to think as the persistent throbbing gradually spread from her ass to her core. Even as a child, no one had dared to chastise her physically. Yet Fane dared. Fane hadn’t hesitated.

“I belong to you,” she whispered and heat cascaded through her body.

2017-04-02
Chris
Previous: For His Pleasure by Vonna Harper
Next: Her Marine Rancher by Dinah McLeod