Conquering the Queen Lays Siege to a Top 100 Spot 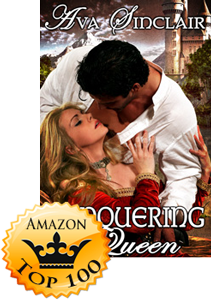 ★★★★★ Nicole H. Vela @ Amazon.com “Checkmate!” on September 12, 2016
Lies, treachery, intrigue and betrayal make strange bedfellows. Avin, she is both beautiful and queen has a veiled shielding her from reality. She has been betrayed. Her people believed her to be the ice queen an oppressor to her people. Her father was in fact the culprit, unbeknownst to the people..Her people. Xander he too has been betrayed, but he has also been misguided. Having loved Avin and he now is a spurned man looking for vengeance. Having overthrown the queen, he vows to makes her submit…but can he? The queen is a hellcat refusing her fate. The conspirators are gathering can they (Xander and Avin) find their way back to each other? When the dust settles who will remain?

Ava Sinclair, the woman is a delight. Her books are a marvelous escape, The books have a certain escape quality, Ava draws you into her books, it’s one adventure after another you literally feeling yourself the observer watching as it plays out. I’m never disappointed. The writing is stellar and always a pleasure. As with all of her books it’s the perfect blend of spanking, love and dominance.
This is a 5 star masterpiece!

★★★★★ Renee @ Amazon.com “Treachery, lies and misunderstandings… all part of a great story” on September 12, 2016
This is a wonderful book. I enjoyed the interactions between Avin and Xander tremendously. The passion between them was explosive and HOT. There was intrigue, suspense, and misunderstandings that kept the story interesting and unique. Another excellent book by Ms. Sinclair.

★★★★★ Valeria Martius @ Amazon.com “Of course the sex was hot………” on September 10, 2016
I’m really enjoying the tact and understanding that Ava Sinclair is taking with her dark romance/slavery au stories. As I said about her last book, I am not here for the Stephanie Meyer/EL James crap where you act like it’s rainbows and unicorns for something creepy to happen in the same world that we live in. Context and presentation is everything.

So to reiterate the summary–Avin is a deposed Queen, Xander her former lover and betrothed, now her King and master. OVER HER LANDS. You can imagine she isn’t too pleased about that. At all. I sense some Game of Thrones influence, due to the walk of shame that occurs at the very beginning, which is awesome………..

This story was different because of the fact that the two main characters had known each other before, and had a loving relationship before. When I had just seen the cover, I’d assumed that the two did not know each other–but again, AS is handling the subject matter with tact, and it completely changes the intents and motivations and feelings of both characters, because they knew each other before. Your preconceived notions about how the book is going to play out are totally flipped in a believable way because of the prior relationship.

And of course, I love the reminder that women have ALWAYS had to face double standards (which is totally relevant due to the s*** show that is the US Presidential race, ugh), and part of what brought Avin down–to Xander, to her people (the nobles, the poor), was her gender and all of the ramifications it brought i.e. too formal, she is cold and uncaring; too warm and she is an empty headed idiot who has no business ruling. However, she is not Cersei. Although they have to deal with just as much political machinations as the characters of GoT.

★★★★★ Bookworm555 @ Amazon.com “Short but Great!” on September 11, 2016
I love when an author gets a book exactly right and this is one of those times. I really enjoyed this story. All the characters (main, secondary, tertiary, etc) were crafted perfectly for the telling of this story and each was loved or hated for their part. The lovers to enemies story was absorbing and I could not put it down. The court intrigue and the conclusion made for a satisfying story that does not let the reader feel that they were cheated due to the short length of the story. I am extremely happy that the epilogue wraps up all the different story threads.

★★★★★ Heart5 @ Amazon.com “Well Written Historical Romance” on September 14, 2016
Avin of Windbourne is in a tough spot. Her kingdom is overtaken by a man she once loved. She is stripped naked and forced to walk through the people she once ruled. Xander once loved Avin and had every intention of spending the rest of his life with her. However a misunderstanding has left both Avin and Xander hurt with feelings of betrayal. Now that Xander has taken over Windbourne he intends to make Avin very sorry for his past hurts.

★★★★★ KKT @ Amazon.com “This is it!” on September 13, 2016
What a delight to read an erotic romance with sizzling sex, fascinating characters, an engaging story AND intelligent writing. This is it! Thank you Ava Sinclair. Avin and Xander were young lovers. Fate intervened in the guise of two manipulative fathers and mutual misunderstandings on both lovers’ parts .Ava becomes queen but is conquered by Xander and is forced to be his slave, collared with her crown. There is distrust on both sides, but passion simmers below. Thanks to an astute advisor to Xander, Cynric, sinister plots are revealed and true love has a chance to survive the winter and bloom in the spring. I received this book from Stormy Night Publications as an advance review copy. I would have bought it anyway. Stay tuned at the end of this book for descriptions of other books by Ava Sinclair. I’ve already ordered my next one.

2016-09-15
+admin
Previous: Her Stern Gentleman Drops Anchor in a Top 100 Spot
Next: Surrendered on the Frontier by Jane Henry