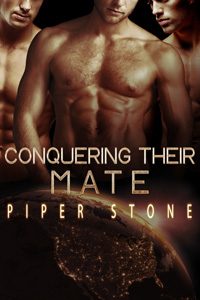 They’re not just going to conquer me, use me, and enjoy me. They’re going to breed me.

For years the Cenzans have cast a menacing eye on Earth, but it still came as a shock to be captured, stripped bare, and claimed as a mate by their leader and his most trusted warriors.

It infuriates me to be punished for the slightest defiance and forced to submit to these alien brutes, but as I’m led naked through the corridors of their ship, my well-punished bare bottom and my helpless arousal both fully on display, I cannot help wondering how long it will be until I’m kneeling at the feet of my mates and begging them take me as shamefully as they please.

Publisher’s Note: Conquering Their Mate includes spankings and sexual scenes. If such material offends you, please don’t buy this book.

“I can’t wait to slide my dicks into your tight little ass.”

Two dicks. The males had two different dicks. The thought was glorious as well as terrifying. Two dicks to suck and clean. Two cocks to slide into my holes. And what about several of them at one time? The pain as he thrust harder and faster shifted into pure ecstasy and I could feel my body bucking, yearning to be fucked like a bad little girl. I was in a dream state, envisioning several of them, their tongues licking every inch of my naked body, their cocks filling every hole.

I hadn’t realized he’d rolled me over but there was no more discomfort from the spanking. When a slight wafting of cool air slid across my pussy, I opened my eyes. He’d lifted and pinned my knees against the table. My eyesight was hazy and as I blinked in order to focus, he opened his mouth, allowing his tongue to protrude. I’d felt the difference in the blissful kiss with Shandar, but seeing the wide, long, and thick tongue, a portion covered with raised nubs, I was thrown into every girl’s raging fantasy.

Kalek lowered his head as he pressed open my pussy lips, swiping the tip of his tongue all the way up the length of my cunt.

“Oh!” Jerking up, stars floated in front of my eyes.

“Keep your legs in position or I’ll have no issue whipping you again.”

The domination in his command was thrilling and I instantly obeyed, gripping my knees, keeping my legs as wide open as I was able. I was left breathless, my cells infused with fire, a deep-seated longing.

He issued a series of guttural sounds, his hot breath cascading across my swollen clit. As he flicked his tongue back and forth, he slipped several fingers inside. Then he began to eat me in earnest, taking his time, savoring his feast.

I was thrown into a moment of pure bliss, gritting my teeth to keep from screaming, my fingernails clawing my skin. There was no way to describe the amazing sensations as the nubs slid across my tender tissue. He was driving me to the point of losing my mind.

“You taste sweet, little human. Ripe and delicious.” Snarling, he studied me as he continued licking, moving up and down in a languishing fashion, his fingers thrusting harder. Faster.

“Oh… I…” Beads of perspiration formed above my lip and along my hairline, before trickling down. I was stunned how incredible he made me feel, electricity shooting through every muscle.

He buried his tongue all the way inside, lapping my cream, grunting like a wild beast. His head was moving in a crazed series of motions, muscles in his neck strained.

I could barely hold onto my legs, the feeling in my fingers stripped away. There was no way I could hold back the climax, no matter if he commanded. As the orgasm built, rushing up from my toes, I jerked up, arching my back. And I let out a powerful wail. “Yes. Yes. Yes!”

His savage grunts, more animal than alien, were keening, bouncing off the thin walls. And he continued his feast, refusing to let me go.

2018-11-10
Chris
Previous: Taking His Mate: An Alpha Shifter Romance by Delta James
Next: Insatiable: A Dark Romance by Loki Renard