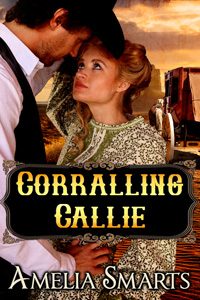 For eighteen-year-old orphan Callie Broderick, going west as a mail-order bride seems to be the only hope she has for a decent husband. But when she sets out for the gold-mining town of Sacramento with nothing more than the clothes on her back and a stagecoach ticket, she quickly discovers that the trip will be quite a bit different than she expected.

As a former soldier and an experienced coachman, Jude Johnson is used to difficulties and dangers of all kinds during the arduous journey west, but he has never had to deal with trouble like Callie before. Not being the kind of man to kick a penniless orphan off his coach, he puts up with the sassy, disobedient girl for as long as he can, but when Callie’s antics put the lives of his passengers at risk Jude is forced to take matters into his own hands and spank her soundly.

The stern punishment leaves her thoroughly chastened and promising to behave, and Jude soon realizes that when she puts aside her foul-mouthed, defiant façade, the real Callie is as sweet and kind as she is beautiful. As the days pass, he takes it upon himself to guide her, care for her, and give her the loving discipline she so desperately needs, as often as she needs it. But when they reach their destination, will he be able to give her up?

He tossed up her skirt and petticoat as she squirmed. “You decided to run off like a child when you didn’t get your way, so you’ll be treated as one,” he growled. He landed a hard swat over her thin drawers, nearly covering the entirety of her bottom with his large hand. “Other people want to sit up front, and you’re going to have a good attitude about it by the time I get through with you. You’re also going to mind my words when I speak.” He punctuated his admonishment with hard swats that jerked her forward each time.

“I’ll mind you! And I’ll have a good attitude.” She squirmed frantically over his lap as his hand picked up speed and fell again and again.

“Hold still,” he said sternly, landing two sharp swats on her thighs, “or I’ll remove your drawers and blister you with my belt.”

She gasped, mortified, and stopped jerking about momentarily, but his swats were so hard that she found it nearly impossible to remain still. This punishment felt much worse than when he’d landed the belt four times over the protection of her skirts, and it sure lasted a lot longer than the first spanking. Jude grasped her waist and pulled her against his body to keep her from twisting off his lap. The smacks were loud and echoed against the walls of the barn. The horses and cow neighed and mooed along with her howls.

Jude brought his hand down with great focus, not letting up for quite some time and making sure every inch of her bottom received punishment. He lectured her as he spanked, but Callie barely heard it, being so focused on the sting, which deepened with each fall of his hand. “You will stay with the others. I’ll not have you running off, worrying me and delaying our trip.” Smack!

“I’ll stay with the others!” she promised in a wail.

“That you will, young lady.” He smacked the low curve of her bottom especially hard. “Otherwise, you’ll be spending the entire trip sitting on a smarting bottom.”

2016-08-21
+admin
Previous: Her Dominant Billionaire by Lily Harlem
Next: The Modesty Cure by Emily Tilton