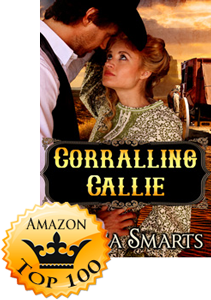 ★★★★★ Eva Mon @ Amazon.com “Another winner!!” on August 20, 2016
Amelia Smarts rocked it again!! I have loved everything that she has written to date and this was wonderful as well.
Callie was just adorable, smart, and also vulnerable and Jude was the perfect man for her. I love that it had just enough spanking and not over-the-top sex. Can’t wait to the next one.

★★★★★ JTC @ Amazon.com “Sweet, historical western” on August 27, 2016
Very sweet historical western story. Callie was a gem – she was brash, sassy, and witty with a good amount of vulnerability and sweetness mixed in. Jude was strong and disciplined, but also kind enough to be moved by her story. I loved how he became her protector so quickly. Callie’s “tall tales” were a hoot, but I loved that the one about JJ was true – that scene was the best! Great secondary characters (expect for the Senator…would’ve liked to have seen him get some payback for what he did to Callie). Fun, light read with a HEA – enjoyable read for the weekend! I’m quickly becoming a fan of Amelia Smart!

Corralling Callie is immediately enthralling, when headstrong orphan Callie finally obtains her freedom from the orphanage where she’s been mistreated, escaping to make a new life for herself, and leaving behind both her ill treatment and childhood. I loved Callie. She was obstinate yet endearing, and I was pulling for this girl from page one. She meets her match in Jude.

A few years older than Callie, Jude is a man of fortitude and conviction. He is the “Whip,” or driver with a reputation for being responsible and dependable, and he resists allowing Callie to accompany him on his journey. Callie is unshakable, however, and Jude finally reluctantly agrees. But as their journey progresses, he finds that she needs more than a stagecoach ride.

“He folded his arms in front of his chest. “I’ll tell you what, if you submit to some old-fashioned discipline, I will consider the slate wiped clean.”

She blinked and stared into his eyes. “Old-fashioned discipline? Like a whipping?”

He nodded once. “Yes, like a whipping.”…He was behind schedule because of the girl’s stunt, and a spanking would only add more time to the delay. Still, he reckoned it was better to punish her now, ensuring a well-behaved passenger for the remainder of their journey…”

He surprises even himself by also punishing her for lying to him, bound by his strong morals to see to her discipline. After he spanks her, she is repentant, but still manages to get herself a few entertaining scrapes. As the two continue their journey, what begins as a sort of business arrangement soon blossoms into much more: Callie falls for the stern but kind man, and Jude can’t help but be attracted to the lovely, innocent girl..

Corralling Callie is captivating, sexy, but beautifully romantic. I loved seeing their love for one another blossom, and the intimacy between them truly enhanced the story. Written in Ms. Smarts’ eloquent prose, with a fast-paced plot line, and enough steamy spanking and sex scenes to truly satisfy, this book is a top notch read. Highly recommended.

★★★★★ Krissyre @ Amazon.com “This is the book you want to curl up with this weekend!” on August 20, 2016
I need my romances to have a sweet, feisty heroine, a big-hearted-but-unquestionably-alpha hero, and plenty of steam, and Amelia Smarts has quickly become one of my go-to authors. Quite simply, her books never disappoint. Corralling Callie is no exception.

From the moment spirited, fast-talking Callie cons her way onto his stagecoach, Jude has his hands full. Callie can shoot a gun and tell a tall-tale like nobody’s business, and she can’t seem to help stirring up trouble. But Callie finds that calm, capable Jude isn’t going to put up with her shenanigans and is determined to ensure her safety and happiness – whether that means protecting her from her nightmares, or punishing her for misdeeds by taking her over his knee… repeatedly. (Unlucky for Callie, but very, very lucky for us readers, as the heat between these characters is palpable!)

I LOVED seeing Jude’s “favorite passenger ever” blossom under his care, and I know I’ll be reading this book over and over again!

★★★★★ Laurel @ Amazon.com “Wonderful Western by Amelia Smarts” on August 21, 2016
When Callie’s parents were killed she was sent to a horrendous orphanage where the food was terrible and she often found herself locked in a closet, her only companions were thr rats and vermin. As a result she had panic attacks. She run away and talked a wagon driver to take her with him. She is to be a mail order bride. Is she unpleasant to the fellow passengers? When she is pleasant she finds out she is liked. Is there an attraction to Jude, the driver? Does Jude like her? Does she marry thr ale order groom?read the book to find out these and other answers. The was a lovely written book and I recommend it. I was given this book from the author for an honest revive. The thoughts and opinions are mine.

★★★★★ Nanette @ Amazon.com “Sweet Little Hellion.” on August 22, 2016
Ms. Amelia Smarts has written an absolutely perfect story of how Jude corralled Callie. Callie is one sassy, witty, stubborn young woman. Jude is one patient, understanding man and a strict disciplinarian. From the first page to the last, all the drama and discipline fall neatly into place. It was engaging, entertaining and I wouldn’t change a thing about this story. I loved it!

Callie sets out on her journey West with the aide of Jude as the stagecoach driver. Jude soon realizes that Callie’s antics are upsetting the other travelers. She defends herself by revealing her past to him. “Seems like you needed to be shown more mercy than justice at the time. As a result of very little care and discipline, however, you’ve turned into a bit of a hellion.” He’s unhappy with her bragging and fibbing. “The point of punishment is to learn from it and modify how you behave going forward.”

As stern as Jude is with Callie, he also shows her his sweet side too. When she panics in the dark, he holds her close to his side as he brushes his thumb on her cheek and over her ear to comfort her until she falls asleep. He lets her sit up front in the most comfortable box seat right next to him instead of in the back as it is more bumpy.

As their travels continue, another passenger Annie tells Callie that Jude is quite taken with her. “You know he’s sweet on you, right? He’s used to being in charge. Then here you come, a lady who challenges him, and he’s all balled up by it. Your one of a kind, and you done tickled his fancy something fierce.”

At the next rest stop, Jude comforts Callie yet again through one of her night terrors. “I can’t bear to know you’re scared. I want to make you feel safe.” Callie wants that too. “She wanted him to continue to guide and enlighten her, and she wanted to continue to charm him.”

As for the rest of the story, you will have to read how Jude and Callie lived happily ever after. I don’t want to spoil it for you.

★★★★★ SH @ Amazon.com “Loved it!” on August 24, 2016
I loved this book but Callie stole my heart! She made me laugh and cry and I was thrilled when she got what she always wanted. I was entertained throughout and read this in one sitting! The only thing that I wished was to witness the comeuppance of the mean lady that managed the orphanage. Don’t miss this one! I received this book from Stormy Night Publications as an Advanced Reader Copy.