Corrected by the Doctor by Samantha Madisen 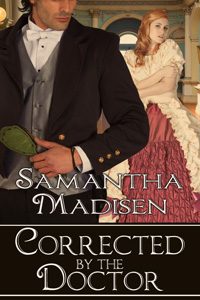 When her wealthy parents finally tire of her delinquent behavior, nineteen-year-old Virginia Adams is sent to England to live under the care of Dr. Alexander Cleveland. Within moments of stepping off the ship, Virginia’s sharp tongue earns her an embarrassing public spanking, and she soon discovers that the humiliating chastisement is only a small taste of what is in store for her.

Over the coming days, she learns what it means to be thoroughly punished in the most intimate, shameful ways imaginable. Yet even though the handsome doctor’s stern correction leaves her blushing crimson, she cannot deny her body’s response to his firm-handed dominance, and before long Virginia finds herself yearning for Alexander to claim her completely. But will he ever see her as more than merely a patient in desperate need of his particular form of treatment?

Publisher’s Note: Corrected by the Doctor includes spankings and sexual scenes. If such material offends you, please don’t buy this book.

Her face immediately began to burn with embarrassment and she turned her eyes toward the floor. This did not help relieve her shame at all. Staring down her body, she found that her nipples were completely stiff, as she’d never seen them before. Hard like two pebbles on her pillowy mounds.

“There’s no need to be ashamed, Virginia.”

The doctor’s reassurance, along with the soft touch of his fingers grazing her cheek, only served to further confuse her as to what she should be feeling. There were so many emotions spinning around inside her she couldn’t pick a single one out.

Virginia looked up to see his smiling eyes.

A knock at the door drew his attention. “Come!” he barked.

The door swung open, revealing Anna standing behind it.

This in and of itself would not have caused Virginia to be tremendously shocked. While it was still new, being paraded in front of everyone without any clothes on, she’d become at least somewhat accustomed to it.

What made her blood run cold was seeing the group of men in tall hats and long black jackets standing behind Anna.

“Ah, Anna!” the doctor said, taking his arms from Virginia and walking toward the door. “Gentlemen!”

Virginia closed her eyes and prayed that a hole would open up in the floor that she could crawl into and never emerge from. The sounds of the group shuffling into the room made her open her eyes.

“Gather round, gentlemen,” the doctor ordered.

A pulse of shame at being so completely humiliated rushed through Virginia. Never in her adult life had she felt so powerless and embarrassed. As the men arranged themselves in a circle around her, she could practically feel their stares raking along her naked body, pausing on all her softest places.

And yet despite all of the embarrassment and humiliation and shame that was roiling inside her, a tickling ache began in her core at being put on display. Moisture seeped out of her, glazing the soft folds of her sex.

“Virginia, these are my students. They’ve come to observe my methods and perhaps some of them might end up in my employ some day. I trust you’ll be as obedient a young woman for them as you have been for me thus far.”

Perhaps it was the helplessness she felt standing there completely exposed. Or, perhaps it was the embarrassment at being put on such public display. Or the chastisement of the doctor’s hand.

Virginia felt the fire of her temper flicker inside herself, then ignite.

Balling her fists and clenching her jaw, she launched herself at the doctor, pummelling his chest with her hands for the brief moment he was caught off guard.

It wasn’t long. A moment later she was over his lap, the dark plug still in her bottom, exposed for all to see.

The first sharp sting of his hand on her rear made her cry out.

2017-08-28
Chris
Previous: His Untamed Mate by Korey Mae Johnson
Next: Chosen by the High Judge by Jaye Peaches