Correcting His Ward by Samantha Madisen 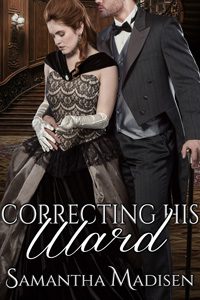 When she is caught by her guardian while spying on him late at night, eighteen-year-old Charlotte Halpine feels the sting of his riding crop on her bare bottom and is forbidden from wearing undergarments the next day to ensure the stern, shameful lesson is not soon forgotten.

Sir Brown is well aware of his responsibility to see to it that his young ward is properly trained for her future role as a gentleman’s wife, and when Charlotte defies his warnings against engaging in acts of self-pleasure her bottom is thoroughly punished both inside and out.

Despite his best efforts to prepare the beautiful, headstrong girl for the attentions of a suitor, however, with each passing day the idea of allowing another man to court and ultimately claim Charlotte becomes ever more distasteful to Sir Brown. Will he cast aside his hesitation and take her as his bride before he gives in to his baser instincts and enjoys her virgin body as he pleases?

Publisher’s Note: Correcting His Ward includes sexual scenes and spankings. If such material offends you, please don’t buy this book.

He touched his fingers to her clitoris again, and Charlotte strained against her bonds and moaned into the ball gag. She shook her head and then began to moan syllables into the gag, begging to be heard.

Sir Browne did not immediately give in to her desires, but instead fingered her until she was tossing wildly against the leather straps, before dropping his fingers to the bed covering and watching her sob into the sheet. She made several futile noises into the gag and then moaned and rolled on her belly.

“When married little girls service their husbands and do so properly, their husbands will sometimes let them have pleasure of their own. When you reach a state of pleasure and climax, it is called ‘coming.’ Do you want to come, Charlotte?”

Charlotte howled into the gag and nodded her head.

“Very well,” he said, and began to stroke his fingertip up and down the face of her clit, which made her moan and twist even more. He stopped before it was too late and enjoyed the moans that were swallowed by her gag.

Then he reached forward and tapped his fingers on the metal ball. “Then you must be a very good girl, Charlotte, if that is what you want. So, you must listen to me and then show me that you have understood. You will accept Mr. Davenport’s offer of marriage and you will also be a very, very obedient wife for him, else he will claim that your marriage was not consummated, and you will be damaged goods that no one will have. I don’t need to tell you that the life you will live as a woman of penury will be most unpleasant indeed, and so I suggest that you make the most of this opportunity to please Mr. Davenport. I shall instruct you thoroughly in the giving of pleasure to a man, and you will be obedient and pliant, and disciplined as required. I am certain that with all of the time to think about it, you see things quite the same as I do: you have no choice but to behave yourself.”

Charlotte mewled into the ball.

“Should I leave you with more time to consider your options, Charlotte? Or do you agree that your only option is to behave as I have asked and accept your training and marriage to Mr. Davenport?”

Charlotte nodded, her eyes wet with tears that did not fall.

Sir Browne released the leather strap that held the metal ball in place, and it fell from her mouth, a long string of saliva connecting it to her for a moment, before it fell onto the sheets. He untied her hands and ankles, and she let her limbs fall to the bedcovers. She was unsure of what to do next, so she waited for Sir Browne’s instructions.

“You will begin your training today, after breakfast. I will come for you. In the meantime,” he said cruelly, touching her again on her swollen clit and making her body jerk. “You will not touch yourself here or alleviate your desires in any way. If you disobey me, Charlotte, you will pay a very dear price, am I understood?”

“Yes, Sir Browne,” Charlotte gasped. She did not want to be confined any longer, and that was the only thing she could think about.

“Stand up and straighten yourself out. Return to your room and come to breakfast without your undergarments, Charlotte.”

The cool rod of the cane snapped very lightly between her legs, giving a sweet, harsh jolt right against her swollen clitoris. Charlotte gasped. “Only very well-trained, big girls get to wear their underthings. Naughty little girls like you must have a bare bottom that can be spanked and a cunny that can be swatted and played with wherever you are. This is your first lesson and you will now go to bed.”