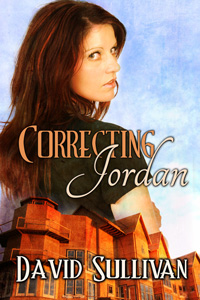 After spending some time working in San Diego, Mickey has made the decision to move back to his hometown of San Jose. He is in his thirties, and is hoping to settle down and find a nice wife.

He moves into a comfortable condo, but his happy homecoming is cut short by his neighbor, Jordan, an attorney and the condo association president, who rules with an iron fist and a rude demeanor. After a fiery confrontation at an association meeting, Jordan confronts Mickey at his condo, insults him, and shoves him. Jordan is utterly taken aback when her assault on his person earns her a firm discipline spanking.

Having never been chastised in anything like that manner before, Jordan is horrified to find herself becoming ever more attracted to the self-confident, quietly dominant Mickey, and a romance begins to grow despite their up-and-down relationship. As she grows closer to Mickey, Jordan soon learns that he is not afraid to take her over his knee whenever he feels that her behavior warrants it. Will Mickey’s firm hand drive her away, or will she learn to accept the correction she needs from the man she loves?

Publisher’s Note: This story contains sexual scenes and spankings, including domestic discipline in a contemporary setting. If such material offends you, please do not buy this book!

“Mickey, stop this. You’re treating me like a child.”

“You acted like one, ergo you get the spanking.” He paused, holding her down while she rubbed her butt. Deciding to take this a step further, he pulled her rose-colored panties down, wishing they were making love instead of this unpleasantness. The spanking continued, a few on one cheek, then several on the other. He varied the cadence, and her body grew into a mass of tension. He waited until her legs and ass relaxed before he drove several more spanks into her butt, sending echoes bouncing around the room. “You earned this. Consider your misdeeds, and how you can be better in the future.”

She finally broke down and cried. The squirming stopped and she seemed to have accepted her predicament.

“Twenty more.” He went into slow-strike pattern—rubbing the paddle on her ass, lifting it, waiting, and then smacking it down hard. “One.” He repeated the pattern as she continued sobbing. Finally he got to the end of the sequence and the final swat fell on her blazing red bare bottom. “Twenty.”

She slipped off his lap and crawled into a large recliner, curling up. She sobbed for a while, and Mickey went to his bedroom, packed the paddle and a few other final items, and taped the last boxes.

After a while, Kerri appeared in the doorway, clasping her hands in front with head bowed. “I’m sorry. I was mad because you’re leaving. You’re the first man to treat me so special, to make me feel so cared for.”

He sat on his bed. “And you reward me by acting like a child. I thought we dealt with this after your spanking the first month we dated.”

“This is the worst I’ve been since then.”

She padded to him and sat, and he pulled her tight. She rested her head on his shoulder. “I’m sorry to have been bad our last night. I’d hoped we’d make love. Can we, or are you too mad at me?”

He nodded, and kissed her deeply.

She slipped to the floor, knelt, and opened his belt and jeans.