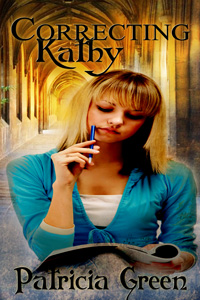 Kathy would never have imagined that one of the most embarrassing moments of her life could make her the envy of every girl at her small university, but after a stumble in the cafeteria leaves her blushing and Hal Emory drenched in soup, she is stunned when the incident ends with her meeting the young, handsome professor for dinner.

She is even more taken aback by the fact that he does not hesitate to lecture her over dinner about her smoking—a habit she has tried many times to break without success. When he offers to help her quit by means of “aversion therapy”, she cannot resist the urge to learn more, and almost before she knows it she finds herself bent over the desk of this stern professor for a good, hard spanking.

After a subsequent chastisement leads to lovemaking which is as hard and hot as it is unexpected, both Kathy and Hal must decide if they want to pursue a romance. Can Hal leave the pain of the tragic death of his wife in the past and allow himself to fall in love with Kathy? Even if he does, will she be able to accept not only his love but also his guidance and, from time to time, his firm hand applied to her bare bottom?

The air in the room went still. Several long moments passed while Hal debated the wisdom of this again, deciding that it was a necessary step if he wanted to help her. He took up his post to the left, thoughts of his wife flashing in his head. Patting Kathy’s bottom, not rubbing—that was too personal—he gauged that his aim was true. Her breathing was shallow, anticipation written in her stiff posture and the way she gripped the desk like a lifeline. That lovely bottom was waiting. It was time to get started. Hal raised his hand several feet, finally bringing it down sharply on her left globe, and watched his handprint blossom where her French-cut panties didn’t cover. Kathy let out a squeak and peered over her shoulder.

“I don’t want you to smoke anymore, Miss McGillicutty. You don’t want to be here like this again.”

Kathy started to say something, but he struck her upturned bottom again…and again…and again several more times. The edges of her panties fell short of the redness he was creating. Pain caused her to finally cry out. “Ouch! Okay, I won’t smoke anymore!”

“No, you won’t.” He placed a half-dozen more smacks on her sweet rear. “I’ll do this to you as many times as it takes.”

Her face was slightly turned toward him. She was biting her lip, and her eyes were screwed up tight. “Ow! I get it! You can stop!”

“You don’t get it, Miss McGillicutty. You want the pain to stop, that’s all.” He smacked her again a half-dozen times and a few tears ran over her nose, landing on his desk. “What happens if you smoke?”

The point had to be crystal clear. He knew, from his experience with his wife, that a woman would make a protest long before the lesson had been learned. He drew his spanks down to the juncture of her bottom and thighs and she cringed and reached back to cover her ass with her hands. “Hands down!”

“Ow!” She was sobbing now, her bright blue eyes running with tears, but she put her hands back on the desk. Maybe she was learning. “Please, please, Professor Emory. Please!”

Her loud, broken-voiced protests were beginning to weigh on Hal, and he thought maybe she’d had enough. The spanking was over. He was sorely tempted to rub her rounded bottom, a bottom which showed hot red handprints sneaking out from under her panties. That ass was far too appealing; he had to change gears.

2013-06-04
+admin
Previous: The Orphan Bride by Chula Stone
Next: The Westerfield Affair by Renee Rose