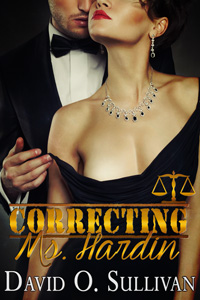 Attorney Janet Hardin is used to being the one calling the shots at her office—some might go so far as to say she is bossy, rude, and high-strung—but when she hires attorney Solomon Thornton, she is totally unprepared for what follows. Horrified by her rude behavior toward her coworkers, Sol decides to teach Janet how to conduct herself in a proper, polite, and respectful manner, one way or another. Things come to a head when, in the midst of what could only be described as a tantrum, Janet dumps her coffee on Sol.

To Janet’s shock and embarrassment, Sol reacts by calmly but firmly pulling her over his knee, baring her bottom, and giving her a long-overdue spanking. Ignoring her tears, he makes sure the punishment is memorable and thorough, making it clear in no uncertain terms that from now on things are going to be different around the office. Sol’s strict but caring discipline works wonders, and soon enough he and Janet have become much more than just coworkers. But can their growing romance survive, or will the trials of daily life and the courtroom tear them apart?

In an instant, the first spank arrived, and she braced herself. Another followed, and a few dozen more came, each one rocking her body. He lifted her skirt and spanked her. At least her panties were up. That was the last bastion of dignity.

“Please, Solomon, don’t do this.” She knew he wouldn’t stop.

“That’s like asking a doctor not to administer a poison’s antidote.”

He spanked. She sobbed. How can he go from loving massage therapist to evil spanker in minutes? She pounded her hands into the couch as he slapped her, raising a burning fire in both cheeks. She sobbed and moaned, but the spanking continued. He even spanked the top of her thighs, which hurt worse than the ones on her ass. She clamped a hand over her mouth for fear the others outside would hear.

He pulled her panties down—so much for the last bastion—and continued spanking her. “Yes, cry. Let it out. As your tears flow they carry with them the sins of your past, and they cleanse your heart and soul.”

“Why are you doing this to me?” She began sobbing openly.

“You need help. One can only guess why the powers above caused us to meet. I can’t go into your mind to discover how you became a mean Scrooge, but I know the antidote, and this is it.”

He spanked her more, faster, harder, harder than last week. She clamped her mouth again to stifle herself. What would she do if anyone ever found out a practicing attorney and owner of a firm at thirty-one would be spanked like a child?

Dear God, let it be over! Make him stop! She was glad the founding partners had each office built with thick, soundproofed doors and foam insulation in the walls to guarantee nothing said in an office could be heard outside of it. Now it protected her immense embarrassment. Suddenly, he stopped, guided her to the side, and stood.

He gave his handkerchief to her and brought her water. She dabbed her eyes and like a magnet’s pull, he drew her into his embrace. “I give my time and effort to you because I’m guided to do so. I don’t understand why. I never should have taken this position, but now that I’m here, I’m compelled to do as much good as I can.”

She held him tight, as tight as she’d ever held a lover. Energy flowed from him to her, like osmosis. Her heart pounded. She enjoyed his masculine cologne and gentle post-spanking ways.

He released her. “I do this to help and encourage you to be a good person and employer. I don’t want to embarrass you before the others, but I will if your actions dictate it. Go freshen your makeup, while I tell Robert you’ll be busy for a while longer.”

She nodded and spoke in an anemic voice. “Thank you.”

Why had she said that? Why had she thanked him for spanking her? She knelt on the couch with her torso draped over the back, rubbing her sore ass.