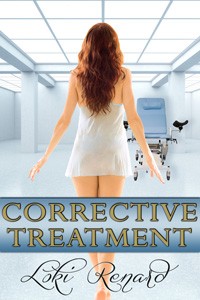 When nineteen-year-old Sophie is charged with inciting revolution in the lower echelons of society, she quickly learns that her position as one of the high-born will not save her from the consequences of her defiance. She is sentenced to corrective treatment and taken into the custody of a stern yet handsome doctor named Richard who will carry out the order of the court.

Sophie is stripped bare for an intimate, embarrassing examination, and her body’s shameful response to this humiliating inspection makes it clear to Richard that his firm hand applied to her bare bottom will need to play a major role in her treatment. Sophie’s correction will involve much more than just a sore backside, however, and she soon discovers that being brought to one blushing climax after another can be a punishment as effective as any spanking.

Though he is expected to chastise her as thoroughly as is necessary to teach her obedience, Richard soon finds himself longing to take Sophie in his arms, and he does not need his medical training to see that she yearns for his touch as well. But if he dares to disregard the law and claim her as his own, can he find a way to keep them both safe from the tyrants who rule their city?

She found herself steered toward the bench, which was tilted at about forty-five degrees, and strapped in place face down. There was a circular support for her head that allowed her to look through the bench, which was slowly raised by mechanical motion until she was more or less eye to eye with Richard.

“This machine is an incredibly sensitive one designed to thrash a miscreant to the very apex of their tolerance,” he informed her. “As, for instance, in the case of a girl who decided to steal something from her doctor.”

“You already punished me for that,” she whimpered.

“I want to make sure it sticks,” Richard said, flickering a wink at her.

She blushed as he walked around behind her. She could not see what he was doing, but she could feel his hands on her bottom, spreading her cheeks, and she could feel the now familiar sensation of lubricant being applied to her anus in slow, circular strokes that grew more insistent the more lubricant was applied.

Squirming in place, Sophie’s heart beat faster as she felt a hard protrusion at her anus. It was another probe, and it was going into her bottom.

“That’s not fair! The other lady had one in her… not her bottom!”

“Now,” he said. “I think you could do with a switching. That’s how naughty girls used to be punished.”

She felt something thin against her bottom. Of course, the machine probably had dozens of implements that could be switched in and out. Richard had chosen one of the harshest, as far as Sophie could tell. It felt very whippy even before it moved away from her skin momentarily.

“We’ll do an initial cycle of six strokes.”