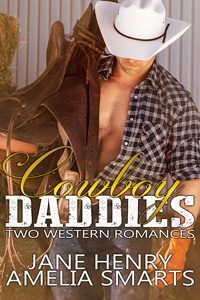 Part One by Amelia Smarts

Eighteen-year-old orphan Abigail Jones has been doing her best to survive while also saving money to put her younger sister through college one day, but when she takes up residence in an abandoned bunkhouse at a ranch she quickly ends up in trouble with the ranch’s owner.

After he catches Abigail trespassing and riding his favorite horse without permission, Clay Ashton scolds her thoroughly. He also makes it clear that she’ll be coming back to his house for a proper meal, whether she likes it or not, and when the beautiful, sassy girl refuses to accept his charity he doesn’t hesitate to take her over his knee for a sound spanking.

Though being punished like a naughty little girl leaves Abigail blushing crimson, she cannot deny her body’s reaction to Clay’s strict chastisement, and soon enough she is calling him daddy and promising to be good. Over the coming weeks she learns what it means to be guided, corrected, and cared for by a firm but loving daddy. But when her pride causes her to make a terrible mistake, can Clay show her that no matter what she will always be his little girl?

In the three months since she came to live with Abigail and Clay, eighteen-year-old Daisy Jones has grown ever more enthralled by the ranch’s tall, ruggedly handsome foreman, Shane Weston. Unfortunately, Shane seems to view her as nothing more than a naughty little girl, and he even threatens to spank her if her irresponsible behavior disrupts Abigail and Clay’s wedding.

After Abigail and Clay depart for their honeymoon, Daisy’s defiant attitude and constant disobedience finally push Shane too far and he puts her over his knee for the spanking she so desperately needs. Ashamed yet undeniably turned on, Daisy looks with different eyes at the man who has taken on the role of her strict but caring daddy.

Taming a girl as headstrong as Daisy will not be easy, however, and Shane’s firm-handed correction will frequently be required to keep her in line. But when Daisy’s past mistakes come back to haunt her and she deceives Shane about the situation, will he discover the truth and teach his little girl never to lie to her daddy again?

“You lied to me. You disobeyed me. You took what didn’t belong to you, and you’ve not taken care of yourself.”

Sorrow filled her as she stood in front of him, facing the man who would punish her, the balance of power hanging between them…

His head tipped even closer to hers as his eyes darkened. “Daisy, this will not happen again. Do you understand me?”

She’d been punished before, slapped in anger by one foster mother and pushed around by another, given detention at school by a teacher. But never had anyone in authority over her spoken with such kindness, such calm, his gentle reprimands drawing repentance from her in a way anger could not.

Daisy could only nod, as he clipped a finger under her chin and one lone tear rolled down her cheek unhindered. “If this happens again, young lady, you will find yourself not only over my knee but bared, those jeans of yours down around your ankles. Do you understand that?”

Her heart skipped a beat. The thought of him spanking her bare…

It came naturally to her to call him sir. Where she came from, it was expected, but here was a man who was not her elder, but… something else? It felt good to call him sir.

It felt better to call him Daddy.

His penetrating gaze met hers for one more second before he nodded, satisfied, then gently pushed her back so that she stood on one side of his right leg, and before she knew what was happening, he’d pushed her down straight over his lap. Her legs flailed, her belly pressed up against the warm, rough fabric of his jeans. He tucked her into him with one hand, while the other rested on her bottom. She was secure, held fast, and utterly vulnerable.

“You’ll take a dozen licks for what you’ve done, Daisy. I’m bein’ merciful. My daddy would’ve have taken his belt to my ass.” He leaned in, and to her surprise, he grasped a fistful of her hair in his large, strong hand, pulling just a bit so that his mouth reached her ear. “Does your daddy need to take his belt to your ass?”

A warm, sensual fire licked through her, and she closed her eyes. “N-no,” she stuttered. “I-I don’t think so!”

Without another word he released her hair and fastened his hand around her waist once again. He raised his arm and brought his hand down, hard, on her upturned and very vulnerable backside. She gasped from the shock and pain of it, and before she’d recovered, he’d walloped her again, a sharp, stinging swat that took her breath away with the intensity. Another one fell, then another, and she lost herself in the intensity of her punishment. After half a dozen smacks, her ass stung, and she could barely register his words.

Three more smacks landed sharp and fast when she failed to answer right away.

She closed her eyes. She could not believe she’d called him Daddy, and this made twice. She’d never called any man Daddy, and the fact she’d done so embarrassed her even more than being over his lap for a spanking.

“That’s a very good girl,” Shane said, administering another hard smack, seemingly unperturbed by the name. “A good girl apologizing to her daddy for misbehaving. Two more, and your punishment will be over.” He spanked her again, and now the tears flowed freely. He hadn’t mocked her. He hadn’t laughed.

He’d called himself her daddy.

She cried without reserve as he gave her the last stinging spank, then in a whirlwind of limbs and tears and movement, she found herself snuggled up in his lap and up against his chest. Her hands wrapped around his neck on impulse, and she buried her face on his white t-shirt, quickly soaking the shirt clean through.

2017-10-01
Chris
Previous: Reformed by the Millionaire by Maria Monroe
Next: Claiming Their Slave by Sue Lyndon