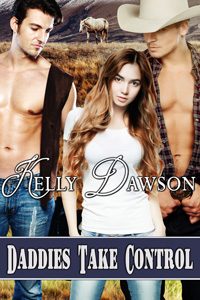 Jen McLeod’s life is falling apart. Having been caught selling marijuana as a last resort to pay for her brother’s expensive, highly specialized medical care, she faces the loss of her job and the potential for jail time. Penniless, desperate, and unsure what to do, she foolishly tries to steal a wallet from Luke Lewis, an old boyfriend, only to be chased down by his brother Cody.

Luke still has a place in his heart for Jen, and after the two brothers listen to her story they promise not to report her theft to the police if she will accept a punishment from them instead. Seeing no other choice, Jen agrees, and a few moments later she is sobbing and promising to be good as her bare bottom is soundly spanked.

The humiliating punishment leaves her with blushing cheeks and a burning backside, but afterwards Luke holds her in his arms and comforts her, and then the brothers make her an incredible offer. If she will be their little girl, obeying their rules and submitting to their discipline, they will bring her to live with them and provide for all of her needs.

Though she is shocked by their generosity and wonders if all of this might be too good to be true, the brothers quickly prove they are serious about taking care of Jen. She soon finds herself being bathed, cuddled, and spanked when she is naughty, and when the two brothers claim her beautiful body completely their firm, dominant lovemaking leaves her spent and satisfied. But can she learn to behave or will she spend most of her days with a bright red bottom?

Publisher’s Note: Daddies Take Control is a stand-alone sequel to Daddy Takes the Reins. It includes spankings, sexual scenes, and age play. If such material offends you, please don’t buy this book.

She felt Luke lift the hem of her t-shirt. Cody’s t-shirt. The cool breeze kissed that private place between her legs and she shivered. Then Luke’s rough, callused hand crashed against her bottom so hard it reverberated through her whole body. He caught the base of her bottom, right where she sat, in an upward swinging motion, his fingers narrowly missing the edge of her pussy. Then he smacked the crest of her bottom in a hard, fast flurry of burning swats that made her squirm. She yelped. Already, her bottom was burning with just those few swats.

He pinched her bottom and leaned over her body to whisper in her ear, “Who owns this ass?” He punctuated his words with another hard swat, making her gasp.

“You do,” she ground out between clenched teeth, squeezing Cody’s fingers tightly.

She hesitated. Cody raised one eyebrow. The alpha-male dominance in his look made her shiver even more than the thought of another swat.

“Cody does,” she whispered.

His grip on her neck tightened as he whacked her bottom again, catching her low at the juncture between her bottom and thighs, twice on each cheek.

“Owwwww,” she moaned. It stung.

She felt her whole body stiffen involuntarily when Luke’s thumb made its way between the cleft of her buttocks to press against the entrance to her naughtiest hole.

Luke’s thumb pressed harder. Zings of desires rushed through her traitorous body. Her nipples swelled and tightened, and heat surged through her pussy. She avoided Cody’s gaze as shame flooded through her.

Abruptly, Luke withdrew his thumb and his hand crashed down on her bottom again, but with a lot more force than before. Luke wasn’t whacking her anywhere near as hard as Cody had done the day before, but it was still plenty hard enough, and each swat stung like fire. As the spanking continued, his hard hand inflicted a burn that danced across her skin and buried itself deep inside the muscles of her bottom. She kicked her feet, unable to keep still.

“Stop kicking.” A sharp swat to the back of her thigh accompanied his firm order, and she crossed her ankles, willing herself to submit.

“Look at me,” Cody ordered again, squeezing her chin gently. Her tears blurred her vision as she looked at the scruffy goatee beard framing his handsome face. He held her gaze.

A final smack, even harder than before, landed right in the middle of her bottom. Then she felt Luke’s hands wrap around her waist and he lifted her off the bench and to her feet. Cody’s t-shirt fell back down to mid-thigh as Luke pulled her in against him, one hand brushing her hair back off her face tenderly.

2017-05-22
Chris
Previous: Her Russian Bears by Ava Sinclair
Next: The Alien’s Patient by Loki Renard