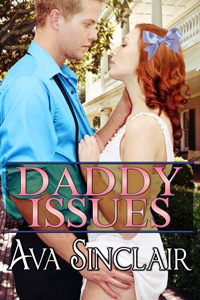 Twenty-five-year-old Ellie Brewer’s abandonment by her father has been a source of sadness throughout her life, and when he rejects her appeal for help as an adult she is hurt all over again. Feeling lost and hopeless, she volunteers for a paid study being conducted by Professor William Ashworth on the topic of young women who lack a strong father figure in their lives.

William’s interest in this particular subject is not merely academic, and he is instantly intrigued by Ellie. He has always hoped to one day find a woman who would benefit from being nurtured and dominated by a loving daddy, and from the moment she steps into his office it is obvious that she is in desperate need of exactly the kind of attention and affection he would offer, not to mention the firm but loving correction he would apply to her bare bottom as often as necessary.

Ellie is shocked when she learns the details of William’s planned research, but with her attempts to hold down a job going awry one after another, she is ultimately left with little choice but to accept the arrangement the handsome professor proposes. He will take on the role of her daddy for the duration of his research, and over that time she will live with him as his ward, subject to his rules and the consequences of breaking those rules.

William quickly proves more than ready to take his ward over his knee and spank her bare bottom whenever she misbehaves, but Ellie soon discovers that her new daddy’s strict discipline makes her feel safe and loved in a way nothing else ever has. Before long she finds herself aching for William to claim her completely, but can she really trust that he will always be there for her, or will their relationship be torn apart by her daddy issues?

He motioned to the leather sofa and Ellie sat down. William sat down beside her and picked up two pieces of paper. He handed one to Ellie. She looked at it. House Rules and Consequences, the heading read, and underneath was a list. She scanned it silently and after a moment looked up at him.

“Is this a joke?” she asked, her voice barely audible.

“No.” The word was delivered with certainty.

Ellie slowly looked back down at the list, clearing her throat before quietly reciting some of the things on the list.

“Dress appropriately. Adhere to a scheduled bedtime. No cursing. No… smoking.” She cleared her throat before continuing. “Speak respectfully at all times. No outright defiance.” Her eyes moved lower. “Consequences,” she continued. “Early bedtime. Corner time…” She stalled. “Lines… For the most serious infractions…” She forced herself to look up. “Spanking?”

Ellie fell quiet. When she spoke again, the disappointment was heavy in her voice. “You said it wouldn’t be weird.”

Ellie stood, holding out the paper. “Bedtimes? Lines…?” She had to force the next word out. It seemed stuck to her tongue like the flavor of a forbidden treat. “Spankings?”

“I wasn’t exaggerating when I said I’d be your surrogate father. That means filling the role entirely. I want to take care of you, to guide you—to spoil you a bit, even. But should it be necessary to correct you, I want you to know what to expect.”

There was a lump in Ellie’s throat that felt like cotton. She tried to swallow it, and when she couldn’t, spoke around it, her voice quiet.

“Spankings?” She felt silly for repeating the word, and then feeling ashamed for why she was repeating it. It was a word that represented her most secret longing for physical guidance, and more. She shifted, trying to ignore the small, soft throb developing between her legs.

2016-05-07
+admin
Previous: Claimed by Her Mates by Grace Goodwin
Next: His Little Runaway by Emily Tilton