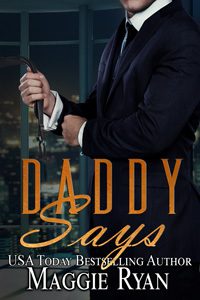 When twenty-four-year-old Jane Knight is assigned wealthy, handsome businessman Sawyer Masterson’s table at the upscale restaurant where she works, she quickly finds herself breathless, blushing, and tongue-tied, and it is only his warm, calming demeanor that keeps her from humiliating herself completely. What truly catches her off guard, however, is the card he leaves behind to let her know that he would like to be the daddy she clearly needs so desperately.

The mere thought of a strict daddy taking her in hand—and over his knee—leaves Jane’s heart racing and her panties soaked, but when Sawyer bares her bottom for the first spanking of her life it is only the beginning of his plans for her. He is going to teach her to be his obedient little girl, and she is going to discover the pleasure of being made to do exactly as daddy says.

His words, the feel of his hand laying across her ass, and the feel of his free arm hugging her just a little closer to his body made Jane feel secure, but the moment she felt his right leg lifting to capture both of hers, she started to panic.

Why those three little words didn’t have her fighting like a wildcat to get free, she’d never understand. Perhaps it was that he didn’t sugarcoat it, didn’t lie, didn’t even assure her that it wouldn’t be that bad, but whatever the reason, they managed to settle her in the mindset of a little girl who’d chosen to misbehave and who had a daddy who wouldn’t allow her to be naughty without consequence. But when she felt his hand disappear, she knew that she’d earned this spanking and was finally ready to accept her just deserts.

The first strike shocked her enough that she remained absolutely silent, the second had her drawing in a huge gulp of air, the third had her head rearing back, and the fourth had her finding her voice as she shrieked. Hell, yes, it hurt! This was nothing like the time she’d been over Joe’s knees for that ridiculous facsimile of a spanking. Sawyer’s hand, the same hand that had made her feel so small, so secure as he’d held hers, was now falling like a paddle. It was hard and it was huge enough to cover a great deal of territory with each swat.

He ignored her cries, the sound of each crack of his hand bouncing about the room as she was sure her butt was bouncing beneath each stroke. No longer worried about the embarrassment of her position, no longer caring that he was staring at her bare bottom, all Jane was concerned about was surviving the spanking.

“Settle down, Janie. We’ve only just started and promises made while getting a spanking are rarely kept.”

Another half dozen strokes and she was sure she’d never sit again. Jane wanted to curse the lack of carpeting as her fingers clawed at the floor, her nails scraping over useless hardwood that didn’t allow a grip. Trying to kick her feet was thwarted by his leg pinning hers. Still, she couldn’t remain still. She wiggled, she squirmed, and she attempted to buck like a bronco with a burr under its saddle. When all that failed, she whipped her hands back, waving them in the air, attempting to block even a single swat.

“Naughty,” he said, capturing both of Jane’s wrists, pinning them against the small of her back. “Little girls who misbehave during their spanking earn extra strokes.”

“Daddy decides what is enough. Not you, Janie.” With that, his knee lifted, her face lowered and she discovered that her bottom was not the only place that her daddy could turn into a furnace. When he began to swat the area where her bottom merged with her thighs, Jane gasped and then burst into tears.

“I’m sorry, Daddy! I’m sorry!” The fact that she’d just called him Daddy for the first time registered and yet it didn’t seem strange or forced… it felt just right.

2017-12-03
Chris
Previous: On His Naughty List by Shelly Douglas
Next: His Captive Pet by Measha Stone