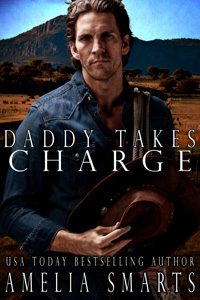 Jackson Kane has always had a special place in his heart for Lydia Morgan. After her father’s death leaves her alone in the world, Jackson provides her with room and board in return for help around his ranch. But his generosity is met with one act of petulant rebellion after another, until she finally pushes him too far and he decides it is long past time to take her over his knee.

As embarrassing as it is to be spanked with her panties down like a naughty little girl, it is when Jackson makes her call him daddy that Lydia’s cheeks truly blush crimson. But a bright red backside is just the start of Jackson’s plans for Lydia, and soon he is bathing her, baring her in the most intimate way possible, and bringing her to a shameful climax right there in the tub.

Over the coming days, Jackson sets about teaching his little girl how easily her daddy can make her quiver with need, but when the ranch faces financial trouble can Lydia find a way to help?

Jackson removed the plug and allowed the water to drain until there were only a couple of inches left at the bottom. Lydia understood that he intended to shave her then, and she felt very shy. Tempted to close her legs, it took every bit of her courage to remain open to him, where he could view her body in the bright light and do with it what he willed.

“Now, you’ve got to open very wide for Daddy,” he said as he rolled the soap in his hands to create suds.

“I am open, Daddy,” she said. Her legs were still spread with each knee touching a side of the tub.

“Not quite wide enough. Drape this leg over the edge,” he instructed, tapping the knee of the leg closest to him.

She did as instructed, sprawling her legs apart obscenely and exposing every inch of her womanhood to him.

He nodded, satisfied, and rubbed the soap against her labia. “I’m going to remove all the hair from this beautiful pussy,” he told her. “I want to be able to touch it and gaze on it with no interference. You must always be exposed to me. Do you understand?”

“Yes,” she said, feeling meek and even shyer than before. Being with Jackson was like being on a rollercoaster. Her feelings were extreme, and just when she thought she’d gained control, a dip in his voice would cause her stomach to plummet.

Jackson picked up her razor and scraped it downward along her outer lips in short, quick strokes. He efficiently removed the hair he’d caught in the razor by splashing it off in the water left in the tub. Her face grew warm as the intimate act continued, somehow becoming even more embarrassing with each passing minute. His face was set in concentration, the same look she’d seen when he was saddling a horse or repairing fences. In that moment, she was his project and, true to his nature, he was intent on completing it properly.

Perhaps that’s why she felt so embarrassed. Reduced to an object that needed to be worked on, a delicious shame enveloped her. When he glanced at her face, he read it in her eyes.

“Are you embarrassed getting shaved by Daddy, little girl?”

“Yes,” she admitted, feeling the flush rise higher in her cheeks.

He patted her plump outer lips. “Now when you walk, when you get dressed, when you cross your legs, you’ll feel how smooth you are and remember when Daddy shaved you. It’ll be a reminder that you can’t hide or run away from me. When you swore at me and ran off earlier, what did I do?”

“You came and found me.”

He set the razor down. “That’s right. I found you, stripped you naked, and then made you even more naked by shaving you.” His thumb flicked her clit and two of his fingers found their way inside of her.

“Ohh,” she gasped, tilting her head back. His lips connected with her neck as he rubbed and pleasured her in the most delicious manner.

“I won’t run away from you again, Daddy,” she promised with a squeak.

“No, I don’t think you will,” he agreed, tapping on her clit, “especially after I spank you for it.”

She groaned. She’d forgotten she was still due a spanking, and the dominating way he’d informed her of it only served to arouse her more.

“Oh, yes,” he growled against her neck. “Don’t think I’ve forgotten that. You’re getting a sound spanking on your bare, wet little bottom after this.”