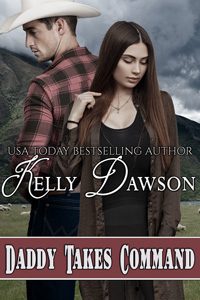 Nick Martin is a champion bull rider, and when he accepts a job managing a farm he is just looking for a paycheck… until he meets Sarah Taylor, the beautiful, headstrong young woman trying to run the place in her injured father’s absence. Though it is obvious almost immediately that Sarah is in way over her head, Nick soon realizes that what she truly needs is not a manager, it is a firm but loving daddy who will not hesitate to take her both in his arms and over his knee.

Over the coming weeks, Nick makes it his business to care not only for the farm, but for Sarah as well, and though she blushes crimson every time her cute little bottom is bared for a spanking, his bold dominance and strict correction arouse her deeply, and it isn’t long before she is learning how intensely pleasurable it can be to surrender her body completely to her daddy.

As Nick and Sarah work to see the farm through the rough winter months, their bond grows stronger each day. But with both of their lives haunted by past tragedies that tore their families apart, can Nick finally find a way to forgive himself and be the daddy his little girl deserves?

Publisher’s Note: Daddy Takes Command is a stand-alone sequel to Daddy Takes the Reins and Daddies Take Control. It includes spankings, sexual scenes, and elements of age play. If such material offends you, please don’t buy this book.

She froze as he drew her underwear gently down over her hips, pushing them and her jeans down her thighs to her knees. Nick still held her wrists firmly in the small of her back and had her pressed over the arm of the couch.

“Give yourself to me, little girl. Give me that naughty little ass of yours.”

Her face was flaming, she could feel it. She felt so naughty, bent over the couch bare-bottomed, with sparks flying through her body. It was embarrassing, but erotic at the same time. She pressed her cheek against the seat of the couch but tilted her head slightly so she could look up at Nick. An impressive erection tented his jeans and his dark eyes smouldered with passion. The day-old stubble disguised, but didn’t hide completely, the arousal in his face, the firm set of his jaw, the way his nostrils flared above slightly parted lips. He wanted her; that much was clear. By the look of things, he wanted her as much as she wanted him.

“Ow!” she yelled, as his hand crashed against her bottom, branding her. It hurt so much more on bare skin, and she wriggled, partly in a futile attempt at escape, and partly in hope that moving would ease the biting sting. It didn’t, and before the sting had abated fully, Nick’s hard hand landed again.

“Naughty girls who don’t do as they’re told get their bare bottoms smacked, don’t they, little girl?” Nick’s voice was barely more than a husky whisper.

“Yes, Daddy.” Her answer came out as a squeak as she sucked in a harsh breath. Her nipples were hard inside her bra, sensitive against the lace that restrained them. The top of her thighs were slick with her juices. Heat radiated outwards from her core, the pain in her ankle forgotten.

Her body quivered as Nick pressed his fingers into her scorched bottom, rubbing out the lingering sting.

“Have you learned your lesson, little girl? Or do you need another smack?”

“Have you?” Nick sounded doubtful as his palm cracked across the fullest part of her bottom again, sending sparks through her.

“Yes, Daddy!” she squealed, clenching her cheeks together against another hard slap.

“Are you sure?” Two more quick smacks accompanied this question, one on each cheek.

“Yes, I’m sure!” she insisted, breathless as his fingers roamed between her legs, sliding inside her wet entrance.

“You’re so wet, naughty girl!” Nick’s voice was a husky growl that rumbled through her, only enhancing her desire. Withdrawing his finger from her abruptly, he wiped her juices across her hot bottom, then slapped her again, hard, twice.

“Will you?” His hand on her back held her firmly, but her legs were jelly. She had all her weight on one leg anyway, thanks to her sore ankle, and it was shaking. Shivers zipped down her spine as Nick pressed the heel of his hand against her hot bottom and reached for her swollen labia lips with his fingers. He slapped her engorged lips lightly with his fingers, lighting fireworks inside her.

“I asked you a question, little girl,” he growled, drawing circles with his fingers on her drenched pussy.

“Yes, I will be good, Daddy!” It all came out in one breathless word, a desperate promise, in a high-pitched tone. She clenched her hands, her wrists still held fast against her back.

2018-10-27
Chris
Previous: Under Alien Influence by Emily Tilton
Next: His Little Bride by Aurie Jameson