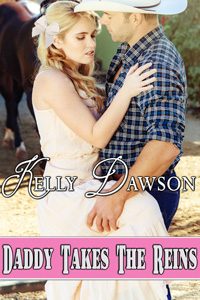 When she lands a job as an apprentice jockey at a racing stable, Bianca is determined not to let her Tourette’s Syndrome interfere with her dream career, and she does her best to conceal her occasional tics from her ridiculously handsome new boss. But Clay Lewis is not an easy man to fool. He soon discovers her secret, and when he casually mentions that she ought to be spanked for her deception it sets Bianca’s heart racing like nothing ever has before.

Her crush on Clay grows stronger by the day, but while she strives to impress him at work Bianca struggles to deal with tragic circumstances in her own life. With her younger sister—and lifelong best friend—incapacitated by terminal cancer and becoming more and more dependent on her, she finds herself pushing herself to the point of skipping meals and going without sleep.

Clay can see the toll that stress is taking on Bianca, and when she collapses from exhaustion at the stable he knows it is time for him to step in, but not as a boss or as a boyfriend. What she needs is a loving daddy who will both comfort her when she is sad and bare her bottom and spank her like a naughty little girl when she doesn’t take care of herself properly.

Bianca delights in the attention she receives from Clay, and when he takes her in his arms and claims her as his own it brings her more pleasure than she would have ever thought possible, but she cannot help wondering if he will stay by her side even when her tics are at their worst. Can she truly trust Clay enough to surrender her heart to him and let her daddy take the reins?

She squirmed uncomfortably as Clay teased her puckered hole, stretching her wide, as he gently inserted the plug. She sucked in a breath at the pang of pain that hit her as the steel plug was pushed further and further inside of her.

“Stop?” Clay asked incredulously. “You don’t make the rules, princess. This is a punishment; you’re not meant to like it.” But he did stop, and he held the plug still as he caressed her bottom softly with his other hand.

“Just… just give me a moment to get used to it,” she begged, barely able to breathe. She relaxed slowly as Clay continued to trace circles on her bottom with his fingers, the roughness of his skin chafing against the tenderness of hers. “Does… does this mean I won’t be getting a spanking?” she asked him in a small voice full of hope.

He pushed the steel rod in further, quickly ramming it all the way home, and she yelped. But as he held it there and continued to rub her bottom softly, she decided that, although it was definitely uncomfortable, she quite liked the sensation after all. She felt full, and a delicious ache was spreading throughout her pelvis; a wetness was growing between her slightly parted thighs. Clay must have noticed it—she gasped as he slid his hand down and dipped his long finger in her juices, spreading it over her pussy and the very top of her thighs.

“My, my, you are very wet, my princess,” he noted with satisfaction. He took his hand off the base of the plug. “You’ll need to clench your bottom to hold that in there,” he told her. He lifted her gently to her feet and pointed her to the corner. “You can stand in the corner for me with your hands on your head and your legs spread. I want your body on display for me.”

2016-05-28
+admin
Previous: Claimed by the Mountain Man by Amelia Smarts
Next: Reforming Jane by Maggie Carpenter