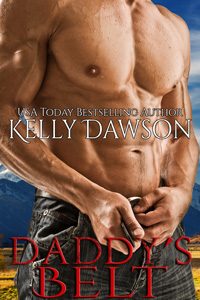 She’s been spoiled her entire life. Now it’s time for her to get a taste of daddy’s belt.

After her father’s death, Melanie Smith is shocked to learn that he was so deep in debt even his house will be seized by his creditors. Homeless, penniless, and with no job prospects in America, she has little choice but to return to New Zealand and accept the only employment available to her, even though it will mean leaving the comforts of her old life behind to work as a farmhand.

Teaching a spoiled city girl how to care for his livestock is the last thing Blake Howard wanted, but something about Melanie calls to him. He finds himself wanting to give her exactly what she needs, and no matter how much the thought makes her blush, what she needs is to be taken very firmly in hand by a daddy who won’t hesitate to redden her bare bottom as often as necessary.

When Melanie pushes Blake too far with her petulant disobedience she quickly discovers that his threat to spank her was not an idle one, yet as she goes about her first day on the farm with a sore backside her arousal grows more intense with each passing minute. Soon she is calling him daddy as he claims her hard and thoroughly, but as she is held in his arms, spent and satisfied, she cannot help wondering what it will be like the first time she feels the sting of daddy’s belt.

“You were a very naughty little girl, Melanie, and naughty little girls who swear and break the rules and refuse to take their spankings properly get Daddy’s belt.” He let go of her and stepped back, giving her room to get down. “Now come on, get yourself into position and bend over. Let Daddy redden this ass properly.”

Melanie didn’t move. She felt her lower lip pushing out in a pout. It wasn’t fair! She didn’t want another spanking. She’d been spanked enough.

“You told me you wouldn’t use your belt,” she mumbled, not daring to meet Blake’s eyes.

“I told you if you took your spanking like a good girl, I wouldn’t use my belt,” he corrected her. “But you interrupted me and threw a tantrum partway through. That’s not taking it like a good girl, is it? I meant what I said, Melanie. I absolutely expect you to obey me. In everything.”

Tingles shot through her as he grabbed her arm and helped her down, physically turning her and pushing her down over the tray of the ute, just as she’d been before. Her pants fell to the ground, landing in a puddle of mud, getting tangled under her feet, but she ignored them. Her bottom clenched involuntarily. When she’d agreed to stay on and let Blake be her daddy, she’d had no idea just how strict he would be. There was no leniency at all; he was immovable, dead set on bending her to his will, no matter how much she resisted.

“Spread your legs,” he growled, tapping the inside of her thighs with his fingers. “Wider. Arch your back, push your bottom up and out, and show me that beautiful pussy. I want your charms on display when I punish you.” His lewd words went straight to her core, making the butterflies within her take flight.

Hesitantly, she obeyed, and gasped when he dragged his finger up her dripping slit, wiping her juices across her hot skin. “So wet, little girl,” he murmured.

She hated that he was right. She hated that her body responded to him so well; she hated that his stern dominance turned her on so much that even the pain of the spanking couldn’t take away her arousal. The arousal that he’d felt evidence of. She was so embarrassed. It was bad enough that she was where she was, bare-bottomed out in the open, over the back of his ute, fully on display for him. But for him to know that she liked it, well, that was just mortifying. There had to be something wrong with her. Normal people didn’t respond like this, surely? Normal people probably don’t have a sexy daddy like Blake spanking their butts, her inner voice reminded her, making her insides quiver all over again and a fresh blush of heat spread over her face.

“I love how wet you are, little girl. If you weren’t so naughty, I would fuck you right now, in this perfect position.” Again, his fingers went to her pussy, dragging up her slit again, stopping at her clit, his thumb rubbing softly, igniting fireworks within her, making her rise up on her toes. A soft moan escaped her lips. “But you’re a very naughty little girl,” he growled. “And naughty little girls get punished, not fucked. Thorough fuckings are only for good little girls,” he hissed directly in her ear. “They’re for good little girls who obey their daddies and don’t break the rules.”

She groaned at his words, wetness seeping out of her, as he grabbed a handful of her hair in one hand, pulling her head back, and swatted her backside hard with his other hand. With his fingers splayed out, his huge hand covered most of her bottom in the one smack and she jumped, shrieking as the movement caused her hair to pull hard enough to cause pain. Immediately, he slapped her pussy, his fingers landing in a stinging splat right on her swollen labia. “Keep still,” he growled.

He released her hair and she bent forward, grateful for the small freedom. Her stomach lurched in nervous anticipation.

“I’m going to take my belt off now little girl, and you are to stay right there,” he ordered. “You are not to move an inch. Do you hear me?”

“Yes, Daddy,” she whispered again. She swallowed, her hands trembling as she clenched her fists tightly against the dirty tray of the ute. Her pussy throbbed and her tight, hot breasts ached, squashed beneath her.

She could feel her pulse in her bottom, the burning increasing and easing slightly with every beat of her heart. And it was about to get worse. She held her breath as she heard Blake undo his belt. When she heard the whoosh as he pulled it free of his jeans, she buried her face in her forearms. Her bottom clenched of its own volition, but aside from that she didn’t move, ensuring her feet stayed firmly planted just where they were, spread in the position Blake had put them.

“There will be three,” Blake told her. “Hold still.” To help her, he planted one hand firmly in the small of her back, holding her down, and a split second later she heard the swish of the leather as Blake dragged it through the air, the sickeningly loud crack as it connected with her ass, then the burning line of fire.

“Ah!” she gasped. “It hurts! Too much!” She shook her head furiously, using all her willpower to keep her feet still. “I can’t take any more!” she cried.

“Two more,” Blake insisted. “When I set a punishment, I follow through on it. Every single time. That’s something else you’re going to learn about me. I’m a very strict daddy. When you earn a spanking, you’re going to get one. The whole thing.”

2019-04-20
Chris
Previous: Kept for Their Use by Ivy Barrett
Next: Captured and Claimed: An Alpha Shifter Romance by Delta James