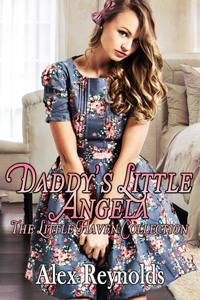 Despite being twenty-six years old, Angela loves that her husband treats her like his sweet little girl. But even though he is always more than ready to spank her bare bottom when she is naughty, Angela sometimes can’t help feeling superior to the other women in the small age play community of Little Haven, particularly the ones who act the youngest.

But her daddy will not tolerate her being mean to others, and after she makes fun of another girl and hurts her feelings badly, he decides that some very thorough, embarrassing discipline is needed. Angela will be spanked, bathed, made to wear baby clothes, and treated like a very little girl until her daddy is sure that she has learned her lesson.

Angela sighed deeply as Charlie helped her into the tub. To her surprise, the water was exactly the right temperature, and the soothing warmth of it relaxed her muscles. She couldn’t remember the last time she had taken a bath, and she had forgotten how nice it could feel.

Charlie grabbed a washcloth, then knelt down next to Angela, rinsing the cloth in the warm bathwater. He then reached over and grabbed Angela’s face wash, which was resting on the edge of the tub. He squirted a little bit of it onto the cloth and rubbed it until it foamed.

“Time to wash your face, little girl,” he said. “Close your eyes and mouth tight!”

Angela couldn’t believe how every simple part of her morning routine could be made into something so humiliating and punishing. She didn’t feel like arguing again, though, so she shut her eyes and mouth as tightly as she could. It felt strange to have someone else washing her face, especially when he cleaned behind her ears.

When he had finished, she cupped her hands to splash water on her face, but once again, her daddy stopped her.

“Let daddy do it,” Charlie chided. He rinsed the washcloth out in the bathwater, then used it to sponge away all the cleanser from her face. He then repeated the action, to make sure she was really clean.

Angela had a feeling she knew what was coming next, and her suspicions were confirmed when Charlie reached for the body wash and began to do the same thing, working some into a thick foam on the washcloth. He then started to scrub her, washing her chest, stomach, and back before instructing her to raise one arm, which he then scrubbed. He washed her armpit, too, and then told her to switch arms. He repeated this with the other arm. Then he told her to sit back and put her legs out of the water so he could wash those.

Once her legs were washed, Charlie ordered Angela to get up on all fours. The water was not too deep, and she did this with ease. Charlie then began to wash her between her legs, which made her blush deeply. It was a strange thing, she thought, how she could find no embarrassment in being touched there for pleasure, but his clinical, parental touch made her ears burn. It was even worse when he began to wash her between her bottom cheeks in the same way.