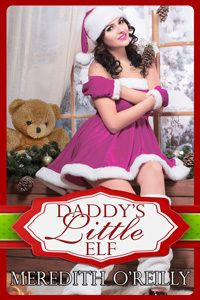 When Chloe Carpenter’s husband, Drew, catches her sneaking away to work despite her promise to take time off to allow them to spend Christmas together, he doesn’t hesitate to bare his naughty wife’s bottom and spank her soundly.

After the punishment is over, Drew quickly reminds his little girl that her daddy will always take care of her, and soon Chloe is snuggling in his lap, drinking hot chocolate, and being given a bubble bath. But when he finds out the secret reason she was slipping off to work, will it make him as happy as she hopes?

“Chloe.” She turned back to look at me. “You’ve broken your promise to me again about this issue. I am extremely disappointed in you. I want you to undress and go stand in the far-right corner of the living room.”

Her mouth gaped open. This was something new. Never had I made her stand in the corner before or punished her anywhere other than our bedroom, but what did she expect? She broke a promise that she had made to me less than twenty-four hours ago. Clearly, the old way wasn’t working. So instead, I was going to try something new. The first thing I had to do was get her to move or else we’d be standing here all day.

She dashed away to the living room. I followed her slowly. When I reached my destination, I took a seat on the couch, which was directly across from the corner she was in. She had followed my orders swiftly, having already tossed her clothes onto the side of a chair and taken her position, naked in the corner. Her bottom was slightly pink from the spanking she had received the day before, and it was about to get a lot brighter very quickly.

I sat on the couch for a few minutes, needing to cool down, and I also wanted her to stand in that corner and think about why she had earned the punishment that she was about to get.

After a few moments, I said, “Come here.”

She walked over to me slowly. When she was close enough, I pulled her down onto the couch so she was sitting next to me. I was going to give her one last chance to explain, to clear the air between us, and lessen her punishment this morning. Before I gave her the chance, I wrapped the throw cover that was behind me, around her. I might be frustrated, but I wasn’t going to let my wife freeze.

“You still don’t want to tell me why you had to go to work this morning?”

She shook her head no.

“You are going to get a pretty severe punishment today. You not only broke your promise to me once, but twice in the past twenty-four hours. Additionally, you swore three times, and tried to sneak out of the house to drive in weather conditions too dangerous to be out in. So, I want you to go upstairs and grab your hairbrush and my black leather belt.”