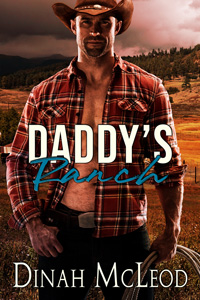 When my friends convinced me to sneak into a bar I knew it wouldn’t go as planned, but I didn’t expect to end up with my bottom bare over the knee of a firm-handed cowboy, let alone for that same infuriatingly sexy brute to make me call him daddy before making me scream his name.

But when he was done, he didn’t call a cab. He brought me to his ranch instead.

A ranch where women are spanked when they’ve been naughty.

The place where I’ll learn what it means for a little girl like me to belong to a daddy like him.

Publisher’s Note: Daddy’s Ranch is a stand-alone novel which is the third entry in the Old-Fashioned Cowboys series. It includes spankings and sexual scenes. If such material offends you, please don’t buy this book.

As the burning assault continued, the pain spreading to cover the entire surface of my orbs, the tears that prickled my eyes began to fall. As soon as the drops of remorse hit my cheeks, I let go. What started out as a soft sniffle became a wail, which morphed into a bawling fest. Then I tried to wiggle my butt out of spankable range, which only resulted in a firmer grip on my lower back and three rapid-fire, heavy-handed smacks to my lower thighs.

“Yeow!” I cried out, arching my back.

“Behave and be still,” he growled in a voice that was so fierce it didn’t even sound like his.

If I hadn’t been afraid by now—and I was too smart not to be be—that would have done it.

Even though I obeyed and went stiff as a board draped over his knees, it didn’t matter. I’d made him mad, and the harrowing intensity he’d delivered with those spanks to my thighs was only slightly lessened when he went back to walloping my behind.

“That hurts!” I screamed. I meant it to be filled to the brim with anger, but as soon as the words were out of my mouth, I burst into tears. And not the quiet, polite tears, but a full-on roar of keening that made me know my throat would be sore in the morning. Not my best moment.

“It’s s’posed to hurt,” he informed me, his hand in rhythmic tempo as he continued his blistering assault on my plump globes.

The burn built as the smacks continued. The pain was an ache that reached deeper, burrowing into my skin like a searing flame.

“Not… this… much!” I protested, scissoring my legs. “Daddy! Please!”

“You be still,” he commanded. Chastising licks rained down, one atop the other. He’d worked his way back up my ass, retracing the path of fire he’d already lit. “I won’t tell you again.” He punctuated the warning with firm smacks that cracked off my bottom sounding like shots fired from a gun.

But it wasn’t what it sounded like that worried me. I hardly had time to think about it, because this new, fresh assault on my blistered rear was more than I could take.

And then it got worse. Because through the haze of my tears I could see something in his hand. “What… what is that?” I gasped.

The words sounded nonchalant to my ears, matter of fact and nothing more. But they inspired fear that shot through me like the tremor of an earthquake. “Wh-what’s that…? Daddy?” I added as an afterthought, hoping that it might inspire leniency.

He held it out for my inspection. It was the same size as a ruler, but was made of varnished wood and was at least three inches thick.

I swallowed hard. “What… what are you gonna use that for, Daddy?”

“You know what it’s for. It’s for blistering your naughty behind.”