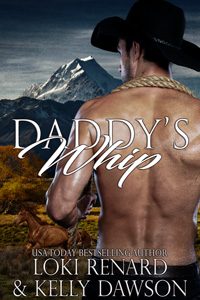 She’s as headstrong as any filly he’s ever broken, but soon she’ll call him daddy.

Sam Cooper needs a capable hand for his working farm and trail trekking business, not a spoiled city girl who doesn’t know a horse from a hamster. Instead, he finds himself saddled with a mouthy, disobedient little spitfire in desperate need of his firm hand applied to her bare bottom.

When she fled Christchurch in the aftermath of a deadly earthquake, Marnie Sawyer figured anywhere would be better than the broken city, until she ended up under the roof—and over the knee—of a man every bit as rugged as the alpine wilderness in which he makes his home.

Marnie isn’t sure what is more shocking, Sam’s willingness to scold and spank her like a little girl, or the way her body responds when he takes her in his arms and makes her his own. But leaving isn’t an option, and though it makes her blush to admit it, she needs a daddy who isn’t afraid to use his whip to break her in and teach her what it means to belong to him completely.

“I know it hurts, little girl,” he said, his voice low and calm. “But you’re not learning your lesson. I look after you. You do as I say. It’s very simple, Marnie.”

“Please! Don’t use the belt again!”

Sam let the leather trail lightly over her cheeks. Maybe he was being too mean. Maybe this was too much for her. His cock was hard as hell against the ridge of his fly and he was dying to fuck one of those tight little holes currently on display. The smaller, darker one was calling him.

He dipped a finger down the cleft of her ass and found that bud, touching her in a place he was sure she didn’t let men touch her usually.

“Why did you pay that bill, Marnie?”

“Because you needed it paid.”

“Right, but you don’t care about this place, do you?” He laid the belt across her ass as he questioned her, keeping his middle finger moving in a slow circle around her tight little hole.

“I care,” she moaned. The pain was not making her arousal abate one bit. If anything, that lash of the belt had heightened her desire. She could barely keep her hips and ass still as she moved against his thigh in a slow gyration.

“Because…” She trailed off, and he pressed his finger a little harder against the bud of her bottom.

“Why, Marnie?” He let his voice drop into a dominant growl, his index finger dropping down to swipe some of her natural lubrication up against her ass before returning his middle finger to the task of teasing her hole.

“Because I want to stay here!”

“Because I just do, isn’t that enough?”

“No.” He picked up the belt again and laid another harsh lash across her ass, right next to the first one. She squealed and bucked, but settled down again when his finger went back to her bottom hole. “Tell me why you want to stay here, Marnie. Don’t you lie to me, little girl. Don’t you hide another thing from me.”

She took a few deep sobbing breaths before she managed to reply.

“Because of you…” Her voice was soft, but he heard her clearly. He felt his heart swell and his dick throb. Fuck. He hadn’t known how much he’d wanted to hear that until she said it. There was so much longing in her voice, so much sweetness—and so much desire.

“Because you want to be mine?” He wrapped an arm underneath her neck and pulled her up so she was arched, her eyes meeting his as he leaned over to look down at her, his finger making slow headway into her tight little asshole. “Is that what you want, Marnie? Do you want to be my little girl? My little fuck toy?”

“Yesss…” There was a guttural desperation in her hissed reply. He saw her eyes fogged with arousal. He saw her mouth hanging open a little, just begging to be kissed. Her bottom was giving way, letting him enter. Sam pushed his finger slowly inside her tight little ass, using his index finger to push inside the warm velvety embrace of her cunt at the same time.

“You don’t understand what being mine is really like, little girl. I can be a very mean daddy.”

“I know,” she whimpered adorably.

“You know a little,” he growled. “But you don’t know everything. If you want to be mine, every single one of these holes is going to be mine too. You’re going to hold your little ass open and ask your daddy to fuck it, understand?”