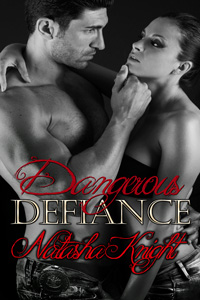 From the moment FBI agent Jessica Manning arrives in the small town of New Hope to investigate the tragic—and suspicious—deaths of two civilians and a fellow agent, she is annoyed by the interference of the local sheriff, Jackson Montgomery. She fumes when Jackson forbids her from continuing her investigation without his assistance, but since her mission is off-the-record and unapproved by the agency, she has no choice but to feign cooperation with the handsome lawman.

To her surprise and horror, Jessica soon learns that Jackson isn’t asking for her obedience, he is demanding it, and when he catches her out looking for leads behind his back, he pulls her over his lap and spanks her bare bottom until she’s sobbing. Her promises to behave are soon forgotten, however, when a mysterious note promising new information appears under her hotel door.

It is only when the Assistant Deputy Director of the FBI shows up in New Hope, cautioning Jessica to back off if she knows what’s good for her, that she fears she might be in over her head and asks Jackson for his help… even if his help results in a bright red, sore bottom. But can the strict sheriff and the feisty agent unravel this tangled web in time, or will they end up paying with their lives for exposing the truth?

Buy This From Kobo

She stared at him with those big eyes, their emerald green softer now that red accentuated them. She was going to be bawling in a minute and he wondered if she needed that actually. He wondered if she had even truly mourned her friend’s death. He had only died two weeks ago.

He turned his attention to her bared bottom. Her cheeks were more fleshy than he imagined they would be for as thin as she was. Her hips were nicely rounded and soft as pillows beneath his touch. They were slightly pink already but he planned to turn them a bright red before he would let her off his lap today. A good, hard bare-bottom spanking would teach her a lesson. He hoped so at least. And it might just keep her safe.

He raised his hand and brought it down harder than he had when he had begun. She resumed her struggle instantly, shrieking with the slaps. He kept her pinned to him, alternating cheeks, not giving her a moment’s reprieve between spanks. He covered every inch of her gorgeous ass and moved to her upper thighs. His own hand hurt but he kept going, watching her skin redden, listening to her cries, which had turned from shrieks to full-on sobbing now. She no longer yelled profanities at him and in time, she stopped struggling and let her body go limp. He released her wrists for the last ones, wondering if she could feel the length of his engorged cock at her belly, hoping she could not. He was, after all, teaching her a lesson. There was nothing erotic about this.

She sniffled and nodded her head, her hands on the ground, fingers digging into earth.

“Don’t clench your bottom,” he said.

He was surprised when she didn’t put up a fight but did as he said instead. He rubbed her bottom for a moment, not long enough to rub out the sting though, and when he began, he delivered the hardest ten smacks yet. The shape of his hand stood out against the red of her bottom, each cheek displaying his print as he brought her punishment to a close and it was once again silent but for the flowing water of the river and her sniffling.

He kept one hand on her low back, holding her as she was as he reached to get a tissue from his pocket. He handed it to her and she took it. Slowly, he stood her up between his legs. She bent to pick up her panties and shorts from around her ankles but he shook his head, holding her arms at her sides. He looked at her for a moment, at her flat belly, at the tiny patch of dark hair between her legs. It was much darker than the hair on her head. He swallowed; he was so close to her that he could almost smell her sex…

But he needed to keep a clear head.

2014-03-20
+admin
Previous: The Winter Storm: An Ever After Chronicle by Renee Rose, Casey McKay, and Katherine Deane
Next: Bought and Trained by Emily Tilton