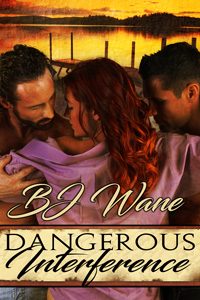 After her sister goes missing, Alena Malloy travels to Blue Springs, Maine—her sister’s last known location—to track her down. As she begins her search, however, Alena’s efforts quickly bring her into conflict with Randy Janzen, the local sheriff, and Nash Osbourne, a Scotland Yard detective involved in the case due to its similarity with a recent disappearance in the UK.

Randy and Nash make it quite clear to Alena that they expect her to avoid interfering with their work, and when she defies them one time too many she earns herself a painful, embarrassing bare-bottom spanking. The humiliating punishment ignites a powerful desire in Alena, and despite her sore backside she finds herself yearning to be mastered more thoroughly.

The two stern, handsome lawmen agree to share Alena, and soon enough she is begging for more as she is taken long and hard by both of them at once. But when Alena’s continued meddling in the investigation puts her life in grave danger, will Randy and Nash be able to protect her?

With a sigh of resignation, she ignored the leap of her pulse and the light in his eyes as she replied with a terse, “Fine. I’ll take the spanking.”

Before she lost her nerve, she followed his slight tug and lay across his thick, hard thighs. But when he yanked her shorts down, along with her panties, she twisted around to glare up at him. “Hey! I didn’t agree… ow!” The crack of his hand on her right buttock startled her, but not nearly as much as her response to the sharp sting that left her skin throbbing with heat.

“Do I continue or do we go have a nice chat with Sheriff Janzen?”

Oh, she honestly did not care for his cool, amused tone or the knowing look in his eyes, but, God help her, she did like the soft stroke of his broad palm over the tender skin he’d just abused. Determined to win this battle, she huffed out an annoyed breath then flipped back around, making a desperate attempt to ignore the way the warm breeze caressed her bare buttocks, the outdoor exposure adding to the arousal his slap had initiated.

“That’s a girl, luv.” Nash smacked her other cheek, enjoying her reluctant capitulation.

She groaned as that accent curled her toes and the next swat landed with blistering heat on her other buttock. Biting her lip, she concentrated on stifling her escalating arousal as he rained a litany of steady, hard smacks across her butt. Each one burned hotter, stung harder, and worked to increase her arousal. By the sixth stroke, her buttocks throbbed with heat and pain she felt reciprocated in her sheath.

A moan slipped past her compressed lips as he moved down to land a well-aimed smack on the sensitive skin of the under curve of each buttock before continuing down to smack her thighs. “Shit!” Swiveling her head, she leveled another icy glare at him. “That, that’s… uncalled for!” His low chuckle grated on her as much as his soothing caresses calmed her ire. God, was she confused!

“I don’t think so. You keep poking your nose where it doesn’t belong.” He liked the feel of her warm skin under his hand as much as he liked the fire in her green eyes.

“She’s my sister,” she snapped in her defense, the urge to shift under his now still hand difficult to ignore. She didn’t know whether she ached for more swats or for more caresses, which only added to her frustration.

Nash slapped her ass again. “She’s Randy’s responsibility now, not yours.” Smack! Smack! Smack! “You need to trust him to find the truth and quit getting in his way.”

She suffered through three more sharp, quick slaps that rendered her incapable of speech, then those oh so soft, so tantalizing caresses that fueled the fire raging between her legs. Her buttocks throbbed with discomfited, heated pleasure he interrupted when he started kneading her cheeks, the tight squeezes reigniting the sharper pain. Her instant struggles to escape his hands were halted by his leg pinning hers in place and a shocking, eye-opening coast of his fingers down her crack to her seam.

Alena’s glistening slit, confirmation of her arousal, proved too tempting to ignore and instead of helping her up, Nash kept her lush body over his lap for a few minutes of sensual torture sure to torment him as much as her. When his fingers encountered the bare flesh of her labia, he stroked the baby-soft skin. “You’re full of surprises, luv.” She rewarded his comment with another green-eyed glare that couldn’t disguise the lust lurking behind the frustration.

2017-01-07
+admin
Previous: The Laird and the Sassenach by Ashe Barker
Next: Her Daddy and Her Master by Katie Douglas