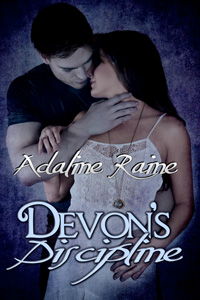 Following the tragic loss of her parents, Devon Dawson has turned to alcohol as a way to cope with the grief and her college grades are dropping fast. Things seem to have hit rock bottom when she is called into the office of Professor Matthews and scolded like a naughty schoolgirl. The handsome professor informs Devon that he’ll be keeping a close eye on her and warns her that if he feels it necessary, he will not hesitate to spank her soundly.

It isn’t long before Devon ends up over Professor Matthews’ knee for a hard, bare-bottom spanking. But even though he treats her like a wayward child, she finds herself inexplicably drawn to him. It seems sometimes as if he can read her most intimate thoughts, and there is a mysterious, supernatural power about him which she cannot ignore.

With the help of his firm hand, Devon begins to put her life back together. By the time she realizes that she is falling in love with him, she is in too deep to turn back. She craves his touch and wants him to take all that she has to offer, but when she discovers the truth about him, she wonders if he will be able to protect her from his own dark desires.

“Is being out all night part of your routine?” Matthews locked those deep blue-violet eyes on hers.

“My routine is none of your business.”

“Your antics caused me to cancel my plans so it is my business. Do you remember what I said in the cafe?”

“I don’t have time to stay here and listen to you lecture me.” Forget this, I am out of here. She stood up and found her book bag on one of the kitchen chairs, but as she reached for it he grabbed her hand.

“I don’t intend to lecture you for this.”

“You’re acting like a child. Accept the punishment I have in mind or drop my class.”

“It’s the only class I enjoy!” Devon brushed at her eyes as tears suddenly welled up and began falling. “If I withdraw this late in the semester my whole term is done.”

“Then go sit on the couch.”

Devon searched his face for some hint of amusement but found none. Is he really going to spank me? She wiped at her cheeks, then resolved to do as he said. She really wanted to pass all of her classes, and his attention had given her a reason to actually participate. She figured a spanking paled in comparison to flunking out.

Matthews joined her on the couch and patted his lap. “Get over my knees.”

Devon felt her lower lip tremble as she took in his command. Why the hell did I agree to this? She clambered over them, unable to comprehend how they’d reached this point. She felt his hand rest on top of her jeans and jumped as the other smacked the center of each cheek.

“Ouch!” Her first cry came from amazement rather than pain. Shit! He is serious!

“I specifically explained in detail to go home first, before you took the vial, but you lied to my face.”

“I decided to go out afterwards, since that would have been more fun. I didn’t mean for you to change your plans. Ouch!” Devon bucked upwards as another round landed.

“You can’t change what happened, but I can help you get back on track.” His hand struck each side of her bottom in fast succession and she reached her arms back to cover herself.

“Fine! Can we please stop playing 1950’s housewife now?” She looked over her shoulder to see him glaring at her.

“We’re not playing.” Matthews slid his hand underneath her and unbuttoned her pants. He yanked them down, turning a deaf ear to her protests.

2014-09-06
+admin
Previous: Her Daddy, Her Dom, and Her Doctor by Emily Tilton
Next: The Firm Hand of the Law by Loki Renard