A Difficult Patient by Loki Renard 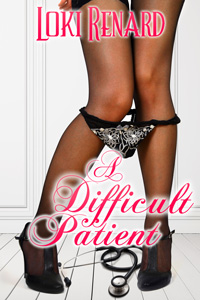 Upon arriving at Memorial General Hospital for treatment following a minor bicycle accident, twenty-six-year-old lawyer Alyssa Winters quickly becomes frustrated at wasting so many billable hours. Ignoring her complaints, Dr. Chase Wright—without a doubt the most handsome doctor Alyssa has ever seen—informs her that he will be personally seeing to her care and he expects her to do as she is told.

Chase asserts his authority immediately and Alyssa is soon blushing red as her temperature is taken the old-fashioned way. More shameful still, when she disobeys his instructions she finds herself over his knee for a sound spanking. Worst of all, after he learns that she’s never visited a gynecologist in her life, his subsequent examination results in the most embarrassing display of arousal she has ever experienced.

Even after leaving the hospital, Alyssa discovers that her ordeal isn’t over. Her firm has assigned her a new client, and that client is none other than Dr. Chase Wright. But how can she work with a gorgeous man who seems to fully understand that underneath her abrasive exterior, she just wants him to take control, spank her bare bottom when she gets out of hand, and then have her any way he wants her?

“I’ve been here for almost two hours,” Alyssa said, ignoring his question. “All I need is a stitch or two and for some reason, you people seem to think that everyone else’s world stops the moment they walk through the doors of this place. Well, newsflash, it doesn’t! I have work to do, and unlike you lot, I actually intend on doing it.”

She had not intended to unload on the handsome doctor in quite so spectacular a fashion, but a certain amount of drama came naturally to Alyssa, and her frustration levels had reached an all-time high. It didn’t help that she was hungry and hurt.

Dr. Wright put his hand on her shoulder, and for a moment she thought he was actually going to treat her. Instead, he bought his other hand down in a sweeping swat that culminated in a harsh connection with her rear.

“Ow!” She squealed in outrage, surprise, and discomfort. “What the hell was that?”

She put her hand to her bottom and glared at him, entirely outraged by his nerve. He’d slapped her backside as if she were… well, she didn’t know what she would had to have been to make that okay. His possession in some age long past, perhaps. Certainly not a modern woman who expected to be treated like an equal. Certainly not a patient.

“Spread your legs a little.”

The order was gruff, almost sexual.

“I need to take your temperature.” He put his hand on the back of her shoulders and gently pressed her face and upper body toward the bed. She felt him tug her panties down to her thighs and a second later she was left with her bare bottom exposed to the stern doctor who seemed to have no qualms about treating her like a naughty girl.

She didn’t spread her legs immediately, but that didn’t stop him proceeding with his treatment. She felt one hand on her left cheek and then a second later she was squirming on her tiptoes as he pressed a dollop of cool lubricant against her bottom hole.

Blushing furiously, Alyssa couldn’t believe what was happening. His fingertip stayed against her tight clenching bud for what seemed like a long time, pressing and swirling in a way that sent shocks zipping through her nervous system all the way from her bottom to her toes and back again. In one swift movement, he had made her completely submissive to him—a foreign experience for Alyssa.

His hand moved away for a second, but swiftly returned with a thermometer. Before she could complain, he slipped it inside her bottom, the cool shaft penetrating her almost casually.

Still shocked out of speech, Alyssa squirmed. It earned her another swat. “Stay still,” he said, feeding it inside her a little deeper. Against all logic, Alyssa had to bite back a small moan. The slim but hard intrusion along with the residual sting from the doctor’s swats had left her at the mercy of her physical reactions. There was no script for being bent over a bed, spanked, and penetrated by a complete stranger.

He was holding the thermometer in place between two fingers, the tips of which were incredibly close to other intimate areas of her anatomy. A little wriggle one way or another and he’d be petting her pussy. She knew it shouldn’t make her feel anything, it was just clinical, but that did nothing to stop the sudden tingling in her clit.

She pressed forward against the bed to get a little pressure there, perhaps relieve it. All it did was leave her subtly trying to hump a hospital mattress while the tall, handsome man behind her with the adept fingers slid the thermometer in a little deeper and then out a little and then in a little deeper… the movement was so subtle that she wasn’t entirely certain it was happening at all, but if it was, then she was to all intents and purposes having more than her temperature taken. Her bottom hole had become his territory.

“You’re hot-headed,” he said, slowly easing the thermometer out. “But you don’t have a temperature, so that’s something.”

2014-10-12
+admin
Previous: Little Scarlett and the Doctor by Rose St. Andrews
Next: The Commander’s Daughter by Morganna Williams