Don't Miss
Home / Blog / Discipline Down Under by Patricia Green

Discipline Down Under by Patricia Green 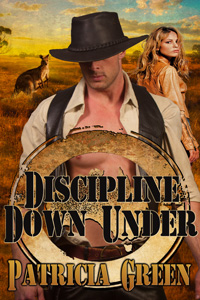 When her mother tires of supporting her during one half-hearted career pursuit after another, twenty-year-old Peggy Fisk is left with only one choice… to seek support from her father instead. He lives in Australia, but that fits just fine with her brand new plan for a career in nature photography. After running off two guides in her first month, however, Peggy is left with one last hope for a trip to the outback—a rancher-turned-bush-guide named Tripp Ruf.

Within seconds of laying eyes on Peggy, Tripp finds himself acting in the nick of time to prevent a snake bite. He is pretty sure things will only go downhill from there unless he puts his foot down and puts it down fast, and Tripp lets Peggy know that he will be the only boss on this trip. He also warns the beautiful, sassy American that careless behavior will earn her a sound spanking, but if her cute little behind ends up bared over his lap, Tripp fears that his biggest problem won’t be the dangers of the outback, it will be keeping his desire for her in check.

It isn’t long before Peggy puts Tripp’s word to the test and learns that a hard spanking delivered by a work-roughened hand is nothing to be taken lightly, but in spite of his strict discipline and his brash arrogance, Peggy grows more and more attracted to her rugged, handsome protector as the days pass. Can she dare to hope that her time with Tripp will leave her with more than just memories, or will it all end in heartbreak for the feisty American and the firm-handed Aussie?

“What a Neanderthal. Over your lap? You couldn’t think of anything more creative?”

“Sarcasm. Not what I would expect from a woman about to get a spanking.”

Suddenly, talking back did seem to be a bad idea. It was wiser just to get it over with. “Fine.” Holding her shorts up, Peg took small steps to reach him. Tripp patted his lap. After giving him a very dirty look, she bent herself over his knees. Immediately, he threw one of his legs over hers, pinning her down. “No hands,” he told her.

There was no answer for that. If this hurt, she was certainly going to put her hands over her butt. Who wouldn’t?

As she settled into place, he tugged her shorts further down, until they were at her knees. Her white lace panties remained as her only protection. “Nice bum,” he told her. Peg felt her whole body go hot with a blush. This was, by far, the most humiliating position she’d ever been in, and with a man she hardly knew, to boot. She had a hint of what it would feel like to be paddled. They’d given her a number of smacks with a paddle when she’d been a sorority pledge in Colorado. But that was among women, and this had a kind of… sexual connotation, not like pledging. There was a pause and suddenly, a loud smack rang out, followed by a sharp sting on her behind. The birds went silent.

Tripp didn’t respond except to smack her behind again. And again ten more times. Her bottom stung all over, like a thousand beestings, both sides equally aching and smarting. “Okay! Okay, I’ve got it.”

“No! No more! I’ll pay attention. I won’t disobey you.” He spanked her two more times. Fire spread down her behind to the junction of her legs and cheeks. “Oh, stop! I get it. You are the lord and master. The patriarch of our little clan! I promise I’ll be good.”

He snorted. “Lord and master and patriarch. More sarcasm. Extra for that.”

Peg’s brain turned to mush. All she could think of was her flaming fanny. Tears formed and trickled off the bridge of her nose and the ever-present drove of flies flitted around her face to get the moisture. “I give up,” she said on a sob, waving the insects away.

Just when she thought she couldn’t take it for another second, the spanking stopped and Tripp released her. Peg hung there over his knees for a moment longer, finally levering herself up. Immediately, Tripp’s arms came around her and he guided her to sit on his warm lap. It was a little painful to sit there, but the sting was slowly morphing into a powerful itch, so rubbing ever-so-slightly against his jeans was somewhat soothing. Tripp didn’t miss it.

2014-07-17
+admin
Previous: The Coach’s Discipline by Katherine Deane
Next: Discipline Down Under Makes a Top 100 List