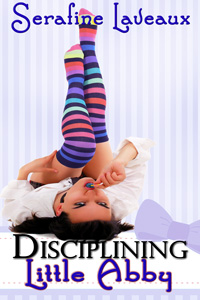 Stuck in a job with no future, Abby Willis finds herself becoming increasingly bitter at her inability to fit in with those around her. It doesn’t help that her mother is always ready to disapprove of everything about her—from the car she drives to the clothes she wears—constantly insisting that if only Abby would grow up and be normal, life would be better for her.

Abby has a secret: she doesn’t want to be grown-up. Thus, when a chance encounter leads her to Mr. Green, a mysterious man who specializes in a unique form of matchmaking, she agrees to let him pair her with a daddy—someone to love and cherish her just as she is even while he teaches her discipline and self-control with a firm hand applied to her bare bottom.

Chris Antonopoulos is Abby’s bad-boy fantasy come to life. The Greek god that delivers balloons to her at work takes her breath away, but only later does she learn that he’s the daddy she’s been promised. He delights her with rock concerts, motorcycle rides, cute pajamas, bath crayons, and more, but Abby lives to push buttons. It isn’t long before she puts herself in real danger, and when she does, Abby learns that a naughty girl who disobeys her daddy can expect to be punished with much more than just a spanking.

As Abby begins to accept who she is, she sheds the insecurities and defenses that held her back for so long. Chris has a secret of his own, though, and he worries how Abby will react when she finds out about it. Can Abby bring herself to trust her newfound daddy no matter what, or will he lose her for good?

No smoking? Abby felt her jaw clench. She’d been smoking for nearly twelve years, had tried to stop a few times and failed miserably. How could he expect her to quit cold turkey?

“What if I can’t just quit like that? What if I have to have one every now and then?” The tremor had returned to her voice.

“Then you’ll find yourself bent over my knee, with that pretty skirt flipped up, and my hand blistering your bare bottom.”

Abby’s eyes widened. Of all the things she’d imagined, spanking had never occurred to her. Spanking had always been a last resort for punishment in the Willis household. The majority of her childhood punishments had involved writing out her crimes and apologies on paper until her wrist threatened to spasm, or sitting quietly in corners, or being forced to go ignored by the entire family for however long her mother felt was necessary. The handful of times when she’d been spanked had been extremely unpleasant and extremely painful.

At last the nature of the arrangement became crystal clear. She’d known from the start it wasn’t Match.com she’d signed up for, but it wasn’t until that moment that she truly understood. Her face flushed as she imagined herself sprawled across his lap with her bare ass in the air, being spanked like a naughty child. For a moment she thought of ending the whole thing, saying no and leaving as fast as her feet could carry her to the front door. Except, the image of her upturned cheeks growing red beneath his palm didn’t invoke fear as much as it did excitement. Already a familiar ache had begun to build between her thighs.

“What are the rules?” The tremor in her voice had been replaced by a squeak.

“Number one, absolutely no smoking. Number two, home in bed by midnight unless you’re with me or you’ve gotten my permission beforehand. Number three, no lying. Four, I’ll give you a private cell. If it rings, it’s from me and I expect you to answer it immediately. Finally, number five, when I tell you to do something, do it.”

“That’s rather vague. You could tell me to set myself on fire.”

She stared at him in confusion. “My panties?”

“It’s much more accurate that way,” he replied.

2014-02-08
+admin
Previous: Tamed by the Highlander by Emily Tilton
Next: Naughty Immy’s Punishment by Carole Archer