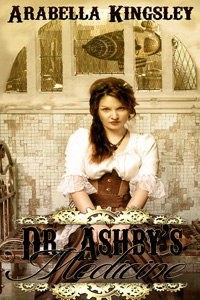 When Lady Lucinda Whittock refuses to marry the detestable Baron Arkham, her father keeps her prisoner in her room and drugs her in an unsuccessful attempt to make her more amenable to the baron’s advances. Just when she begins to fear all hope may be lost, the dashing sky pirate Doctor Byron Ashby snatches Lucinda from her father’s airship.

Doctor Ashby—called “The Wicked Gentleman” by many because of his penchant for spanking women who dare to defy him—uses his plunder to fund research on the topic of human sexual pleasure. When he finds Lucinda in ill health from the drug her father administered, he conducts a thorough and intimate examination, in spite of her protests. He removes the impurities from her body and nurses her back to health, not hesitating to bare her bottom for a firm chastisement when she becomes reckless with her safety. Though she must admit that she fancies her darkly handsome kidnapper, when he proposes that they marry to stop the baron from taking her, Lucinda must consider whether she can submit to both his authority and his sexual appetites, the very thought of which fill her with shame… and desire. And even if she becomes the doctor’s wife, will the evil baron still stop at nothing to stake his own claim to her?

“Nurse, put her on all fours please.”

He watched the woman rest her hands against Lucinda’s slim but attractively curved hips, guiding her up and into position. Once again his cock throbbed at her helpless naked beauty, prepared for him on all fours. The nurse guided her to rest her shoulders on the bed and thrust her buttocks out and up into the air. The sight of her bottom, reddened by his own hand from her spanking over his knee, was enticing. The colour spread down the curve leading to the tender backs of her thighs and then down them.

He selected his long copper rectal thermometer from the table and approached.

“Nurse, open her buttocks, please,” he requested, covering the thermometer in lubricant. The nurse did the same to her fingers and covered the crease of Lucinda’s buttocks in it.

“I do this for the good of your health, girl,” the nurse scolded. “I must prepare you for having your temperature taken. Your life is at risk, girl. Remain still and quiet whilst Doctor Ashby inserts the instrument, or you will experience a lot of pain and discomfort.”

There was light sobbing from Lucinda, but she did as she was told and nodded in agreement, signalling her resolve to be more obedient and accepting of their diligent care.

Doctor Ashby patted Lady Whittock’s delicate burning red bottom and allowed the nurse to open the crease wide. Carefully, he began inserting the probing thermometer, hushing the girl gently when she moaned with a little discomfort. When it was fully inserted, he stood back with the nurse, who handed him a damp cloth to wipe his hands clean. He admired his handiwork before preparing one of his injections.

The beauty he had captured and stolen from the airship lay face down with her shoulders on the bed, her long dark chestnut curls freed from their pinned prison to cascade around her shoulder. Her cherry lips pouted at him, and her eyes were glassy with tears, yet he could view confused arousal swirling within them. Her breasts appeared to be swollen, visible from the sides as the tips and fronts pressed down into the bed, and her body was flushed with gentle warmth. Doctor Ashby was both intrigued and aroused by the fact that the young girl was obviously deriving some unexpected pleasure from his medical probing of her body. Lady Whittock’s red spanked bottom thrust up in the air, and her sex was open and vulnerable to deep penetration by a male. The end of the thermometer protruded from her anus, rendering the girl helpless in making any movement. The whole scene made his cock threaten to burst.