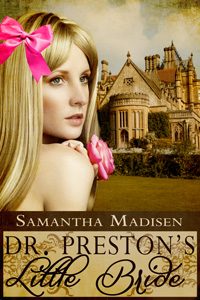 When nineteen-year-old Priscilla Peyne’s guardian realizes that her ward is in desperate need of strict discipline if she is to have any hope of ever marrying well, she brings the recalcitrant girl to an academy for young ladies run by Doctor Charles Preston.

Within moments of her arrival at his door, Priscilla is pulled over the stern doctor’s knee for a painful, embarrassing spanking on her bare bottom. That shameful chastisement is only the beginning, however, and soon enough she has been stripped naked for an intimate, incredibly humiliating examination in front of Doctor Preston’s medical students.

Though he typically approaches the correction and treatment of his charges with a purely professional mindset, this spirited young woman’s helpless response to his dominant touch ignites a fire within Doctor Preston that cannot be ignored, and he wastes no time in asking her guardian for Priscilla’s hand.

After she is informed that she will be married to Doctor Preston and that during the engagement she will be confined to the nursery and treated the way she has been acting—like a spoiled, naughty little girl—Priscilla decides to feign obedience as she plots her escape. Yet despite her plans, with each passing day she finds more and more pleasure in the handsome doctor’s arms. When her wedding day arrives, will Priscilla decide that it is time to take her place as the lady of the house, or will she choose to remain as Doctor Preston’s little bride forever?

Priscilla felt herself being lifted from the table and turned so her body was parallel to the length of it. All the muscles in her middle squeezed as she tried in vain to hide her soft parts from the eyes of the men. But it was of no use. A moment later, her soft, already moist pussy and her tight rear hole were pointed directly at them and she felt her face burning even redder in shame.

“There we are,” she heard him say behind her. Curiosity got the better of her and she looked around to see him standing, pointing the switch he’d used the night before toward her two soft holes. “You’ll notice, gentlemen, that there are already the signs of arousal present.”

Her jaw tightened and she sucked in a breath as she felt the firm end of the switch touching her soft outer lips. He was using it as a pointer and she was the subject! She felt like an animal, put on display for a class at the veterinary institute. Even worse, as soon as she realized what was happening, she felt another blush of shame push more fluids from her body.

“There we are,” the doctor said as soon as he saw the evidence of her arousal surface from within. “We have an arousal reaction already. You will find that the subject responds quite well to correction, in fact she finds it arousing as well.”

Priscilla yelped as the switch that he’d used to point at her now connected firmly with her backside. Despite the pain, she fell into submission much more easily this time and for a moment almost found the feeling of the switch on her rear pleasurable. She soon realized that the sensation had made her wetter still. The spanking stopped.

“You will notice,” the doctor continued his lecture, “her arousal has increased at the correction.”

2016-04-22
+admin
Previous: A Gift for the Doctor by Sara Fields
Next: Mercenary by Renee Rose