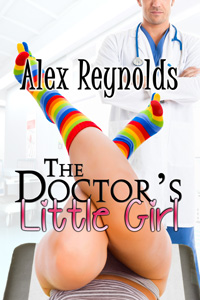 After losing yet another job, twenty-year-old Molly Parker wonders whether failure and sadness are her lot in life. Her last hope lies in Dr. Andrew Harrington, the handsome physician who witnessed a courageous act of kindness on her part and then offered her a job. But Molly can’t help worrying that she’ll lose this job too, just like all the others…

From the moment he set eyes on her, Andrew knew there was something special about Molly—special enough for him to bring her halfway across the country and give her a job at his practice and a room in his home—but it soon becomes clear that she will be a handful. When it seems that her poor attitude at work will leave him no choice but to fire her, he makes a bold decision and gives Molly exactly what she needs: a long, hard, bare-bottom spanking.

Nobody has ever cared enough about Molly to correct her before, let alone take her in hand so completely, and soon enough she is cuddling in Andrew’s lap and calling him daddy. It will take more than one trip over Andrew’s knee to cure her bad habits, though, and discipline at a doctor’s office can leave a naughty little girl blushing bright red before her real punishment even begins. But can Andrew really give Molly what she has always longed for, or will he eventually give up on her like everyone else?

“Show me where you keep your pajamas,” he instructed.

Molly silently pointed to one of the drawers in the bureau near the window. Andrew got up and opened the drawer. Things were stuffed into it instead of being folded, but Andrew knew that now was not the right time to call her out on that. Instead he sifted through the drawer until he found a pair of cute, girlish pajamas: pink polka-dotted shorts with lace trim and a white tank top. He set them on the bed and gestured for Molly to stand up. She did what he wanted her to, and Andrew stood her in front of him, taking a moment to look at her. He looked at her big eyes and her delicate, innocent features, then let his gaze move down to her body. She was absolutely adorable. There was just no denying this. Slowly and calmly, he began to unbutton the buttons on her blouse.

“What are you doing?” she asked. She didn’t sound worried, but simply curious, maybe intrigued by the proceedings.

“I’m getting my little girl ready for bed,” he told her. He finished undoing her buttons and then pulled her blouse off her shoulders, sliding it off her arms and then setting it aside. It revealed an off-white bra. It was simple and unpadded, more for modesty than anything else. Her perky breasts held themselves up, capturing Andrew’s attention through the soft cotton fabric. He reached behind Molly’s back and, with a practiced maneuver, unhooked her bra with one hand. Molly began to blush furiously. It was adorable to watch the redness bloom on her face, originating around her cheeks and spreading across her nose and ears. He smiled boldly, and gently brushed the tip of her nose with one finger.

He pulled the bra all the way off and set it with her shirt, then reached back and unzipped her skirt. The pencil skirts that Rebecca had picked out for Molly were professional, but because of the roundness of Molly’s backside, they clung to her, captivating Andrew’s eyes as she wandered around the office or house. Now that he had seen her bottom bare and red, the thought was never far from his mind. It took a little effort to wiggle the skirt over her butt, and Molly assisted him a little, swaying from side to side to encourage the fabric downwards.

Soon, Molly was standing before him only in her panties. Andrew gently rubbed her back for a second, feeling her smooth, milky skin. He looked at her panties. They were pale purple with white polka dots, and Molly looked sweet and innocent wearing them, but it was time for them to come off. He pulled them down and she instinctively stepped out of them. Her coyness and obedience, combined with her lithe, nude form, made his cock grow hard.

“Good girl,” he praised and Molly smiled slightly through her embarrassment. Andrew took a step back to enjoy the view, noticing that although it was warm in the room, Molly’s peachy nipples were rock hard. He was surprised to see that she didn’t try to cover herself with her hands. Instead, she kept them obediently at her sides, with only the flush on her face showing how much it embarrassed her to be stripped nude like this. “How does it feel to be naked in front of me?” Andrew asked.

Molly bit her lip, as if she was thinking of the right answer. “Vulnerable,” she finally said.

“Vulnerable,” Andrew repeated. “I like that answer. Are you embarrassed that I can see you?” he inquired.

“You’re mine to look at, little girl,” he told her. “I told you you were my little girl, and I meant it.”

2014-12-14
+admin
Previous: Claiming Their Mate by Morganna Williams
Next: The Forbidden Castle by Dinah McLeod