The Doctor’s Wife by Casey McKay 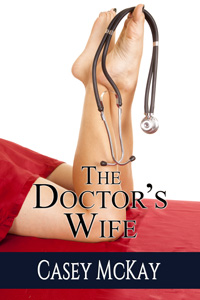 Christina knew when she married Dr. Dan Connolly that it would be the best decision of her life, but as the years have passed and work and everyday concerns have piled up, their passion has begun to cool. Dan is supportive and understanding, but when Christina becomes so busy and stressed that she stops eating properly, he realizes he must step in to ensure that his wife starts taking care of herself again.

Dan makes it clear that things need to change, and Christina soon learns that defying the man who is both her doctor and her head of household will earn her a trip over his knee for a bare-bottom spanking. When Christina makes matters worse by lying to him, Dan decides to give her the type of thorough, embarrassing medical attention which will teach her a lesson she won’t soon forget. But will Christina continue to resist her husband’s dominance, or will she learn to embrace the submission she can’t help craving?

He put his hands on her hips and tugged her back a step, pressing her ass against the front of his pants before he took a step to her side. “What time is it?” he asked.

She looked over her shoulder at him in confusion; when he only looked back at her, waiting for a reply, she glanced at the clock on the stove. “It’s 11:48, why?”

“I see, forty-eight minutes past your bedtime,” he narrated.

She felt something cool and hard run over her bare cheek. She twisted around to see Dan caressing her naked backside with a wooden spoon. When had he picked that up?

“Eyes forward, Mrs. Connolly. You’re getting forty-eight strokes with the spoon and maybe next time you’ll listen to your husband when he gives you instructions.”

“Dan,” she squeaked out, but then the spoon landed in the center of her left cheek. It barely stung and she realized he had selected one of the smaller wooden spoons, lighter in weight and a smaller surface area than some of the ones he could have picked up. He landed a similar swat to her other cheek.

“No talking during your punishment,” he directed. When she glanced back at him, he added, “Think you can handle that?” with an arch of his eyebrow.

She rolled her eyes and faced forward again, biting her lip to hide her smile. Leaning forward, putting more weight on her hands on the counter, she pushed her ass back toward him. Dan continued to lay the stinging swats all over her ass. He announced when he got to ten and then proceeded on. Christina couldn’t help the moan that escaped her lips when he neared twenty. She felt a slight sting, but any trepidation she had that her husband was truly upset with her flew out the window. They reached twenty and the smacks fell quicker, but the burn on her flesh morphed into an ache in her core.

This was anything but a punishment and she wiggled her ass back at him, spreading her legs, hoping he’d pause to caress her dripping wet folds. After he laid down two hard swats to her sit spots that had her dancing up on her toes, Dan acquiesced, his fingers slipping between her legs.

2014-12-11
+admin
Previous: Her Old-Fashioned Doctor by Sue Lyndon
Next: Assigned a Guardian by Emily Tilton