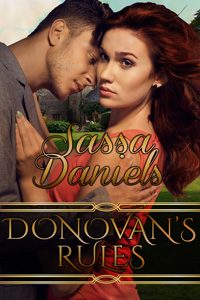 Abby has grown accustomed to being indulged by her husband, the wealthy, powerful businessman Marcus Donovan, even to the point of being allowed to live in her own apartment for a period of time after she ran away in rebellion against the rules he put in place for her. But everything changes when one of his rivals displays an alarming level of interest in her.

Knowing that his wayward wife is in serious danger, Marcus dose not hesitate to take her in hand. Once Abby has been brought back to his estate, he makes it clear he will expect her to do as she is told and from now on any disobedience will earn her a painful, humiliating bare-bottom spanking. More embarrassing still, Marcus quickly proves more than willing to involve members of his staff in her punishments when he feels that a particularly shameful chastisement is needed.

Though his firm-handed discipline frequently leaves her with blushing cheeks and a sore bottom, Marcus’ stern dominance and masterful lovemaking rekindle the passion they once shared and Abby soon finds herself falling in love with him all over again. But will his decision to assign her a full-time bodyguard prove sufficient to keep her safe from the schemes of his enemies?

Without further warning, he flipped her skirt up around her waist, exposing her nakedness to his gaze. A sudden chill assailed her as everything was laid bare. Goosebumps formed on her skin as she realized that in this position nothing was hidden from his view. Abby’s cheeks reddened as she imagined his admiring eyes studying every intimate inch of her, drinking in the sight of her pussy, pink and swollen with arousal. Could he see how wet she was at the mere thought of what he was about to do to her? Did he understand that despite her trepidation, she yearned for his dominance, his command? Her breaths grew shallow as she fought the urge to draw her legs together, to preserve some modicum of the modesty she knew he would not allow her.

“No panties. Good girl, Abigail. It pleases me to find you bared and so obviously ready for me.”

“Now, how many do you think you deserve?”

“Uhm, ten?” Abby had always hated when he asked her to give a number. There was no way to guess what he thought was appropriate. Although she knew that ten was ridiculously low, she thought Marcus would see it as a sign of her nervousness and choose to be lenient.

“Ten?” She could actually hear the smile in his voice. “My, my, we have forgotten how this works, haven’t we? Ten strokes for all the infractions you’ve committed since your last punishment?”

“You don’t intend to punish me for everything I’ve done in the past six months?” Abby wailed. Shocked and a little horrified by what that might mean, she forgot to hold her position and turned to look over her shoulder at Marcus. “But I wasn’t with you. I didn’t think I had to follow your rules when we were apart.”

That wasn’t strictly true. It might not have crossed her mind to dress according to his requirement that she not wear trousers or sneakers but when it came to things like being careful about the places she went and the people she spoke with, she’d worried constantly about what Marcus might think. There were definitely some occasions when she’d flouted his rules about safety. Although she had not undergone a complete character change and become a bar-hopper while they were apart, she had spent time in a little pub around the corner from her apartment. It was a far cry from the elegant establishments Marcus had taken her to. He would not have approved of the place, or the fact that she had gone there alone. Even if she did draw the line at two glasses of wine, he would not have been happy with her leaving herself vulnerable to the advances of undesirable men.

Quite apart from that, Abby didn’t want to think about the number of times she’d broken his rules on the use of obscene language. Given free rein, it seemed she had quite the potty-mouth.

“Eyes front.” Marcus interrupted her thoughts with a stern command. Immediately obeying, she turned away and dropped her head, hoping that this obvious show of remorse would ease his anger a little. It seemed to work as he sighed deeply and when he spoke again, his tone was less harsh. “No, Abigail, I don’t intend to punish you for everything right now. This punishment is for two things. The first is for your appalling attitude toward Louise, who has been hired to make your life easier, not to bear the brunt of your petulant moods. The second is for removing the ring I placed on your finger as a sign of my commitment to you.”

Before Abby could offer any response, she felt the impact of his large, powerful hand crashing against her bare buttocks. She cried out, more in surprise than pain, then quickly gathered her reserves. Marcus had barely got started and she knew that he would expect her to take this punishment with quiet dignity. As several blows landed in rapid succession, a delicious warmth began to spread across her bottom and she knew that the skin would be turning a very pretty shade of pink. The thought was exhilarating. Unable to prevent herself from responding to the growing state of arousal, she ground her hips forward, trying to catch hold of the sensation that was building, to find a way to rub against her clitoris and bring herself to the climax that was achingly close.

2017-01-29
+admin
Previous: Protecting His Pet by Measha Stone
Next: The Wolf’s Mate by Vonna Harper