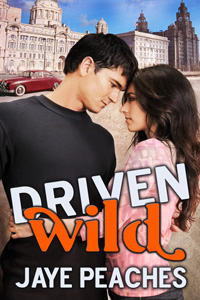 When Leah Andrews’ father hires him to be her chauffeur, Rick Wilde finds himself drawn to the feisty eighteen-year-old even as his patience is tried by her immature behaviour. At last Leah’s rudeness and bad decisions force him to intervene, and he takes her over his knee for a good, hard spanking—the first of her pampered life—but neither of them are prepared for the powerful attraction which follows. Rick knows she needs time and space to step out on her own two feet without him there to interfere, though, and he breaks things off before they go too far.

After Leah’s father dies three years later she returns to her wild ways, and before long her license has been suspended for reckless driving. To her shock, the chauffeur the agency sends is none other than Rick Wilde, and she soon learns that he remains more than ready to bare her bottom and spank her soundly when she needs it.

His firm handed correction brings her lust for him back with a vengeance, and she quickly discovers that he can bring her more pleasure in the bedroom than she ever dreamed possible. But when danger from one of Rick’s past jobs becomes an imminent threat and Rick needs Leah to leave Liverpool until things are safe again, can she bring herself to obey him even though the thought of losing him a second time is more than she can bear?

“I want you to take off your knickers. For three speeding tickets, I think you deserve a bare bottom spanking,” said Rick smoothly.

“What are you going to spank me with?” She knew his trousers had no belt; the hipster style did not need one.

“That is for me to decide. Now, please take off those knickers. Your tights too, naturally.” His tone would brook no more delays.

She slid her fingers up her thigh; the dress was not tight and had an A-line skirt, though a short one. Mortified by her predicament, she had to lift her skirt high up to find the waistband of her tights. Rolling them down, she lifted them over her knickers and then on past her knees and ankles. She slipped out of her shoes and removed the tights. For a few uncertain seconds, she stood on the wooden boards on her tiptoes, feeling the cold between her toes.

Pausing, she peered up at Rick. He stood, leaning slightly on the tea chest with his arms folded across his chest and his face expressionless. If he was excited at seeing her undress, he showed no emotion. Except, when her eyes looked closely, she could see the rapid pulse in his neck and the way he repeatedly swallowed, pushing out his Adam’s apple—it made her realise he was simply better than she was at hiding his feelings.

Leah’s quivering hands went back up her skirt, seeking out the edge of her knickers. Slightly frilly ones with a lacy pattern, she drew them down. The crotch would be wet. She didn’t want him to see it, so as she lifted her feet out, she scrunched the knickers up tightly into a ball.

To her incredulity and embarrassment, he held out his hand and asked for the knickers. She handed over the lacy panties and he didn’t look at them, but squeezed them into one of his front pockets.

“Bend over,” he said, “and then I can lift up your dress. Keep your coat on. It’s cold. I don’t want you catching a chill.”

Leah had to smile a little at his comment about heat. It was cold in the warehouse, almost chilly enough to make her breath stand out, but soon she would be radiating a different warmth. The thought managed to both intimidated her and made her blush with excitement at the same time.

The chest wasn’t dirty. Lower than she would have liked, it forced her bottom up high and her shoulders down. She crossed her arms and rested her head on them. It smelt of bergamot, or something oriental. A calming aromatic fragrance, which made the scenario even more bizarre and erotically charged.

Leah flinched. Two sets of fingers and thumbs had taken hold of her hem and begun to lift up her skirt. Cold air followed behind his fingers. Rising up, her dress reached her bare cheeks. Leah let out a hiss of breath as she felt the fabric caress her skin, rising still higher until it reached her waist. Rick neatly folded the skirt under her jacket, using the weight of the heavier textile to hold her dress out of the way.

Throughout his slow unveiling, she could hear his rapid breathing and her own mirrored it. She had to clench hard to stop her pussy from convulsing. The spanking he had in mind was going to be painful. She wanted it to be. Nobody, except perhaps the policemen and her family solicitor, had actually told her off for being careless in her driving. Even her mother had scoffed, pointing out that Italians were notoriously bad drivers. Now, somebody was finally pointing out the errors, making her accountable and, beneath the nerves and sexual flurry between her legs, she felt good about it.

2014-06-01
+admin
Previous: The Delinquent Bride by Carole Archer
Next: The Marriage Pact by Dinah McLeod