Eight of the Best by Kenny Walters 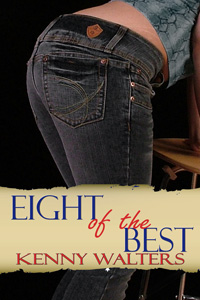 This book contains eight short stories from the author of Bend Over, Girl, a writer who many will know from spanking-related magazines and websites. The majority of these stories depict punishments in British and American schools, with one having a near-future setting and another set in an exotic locale.

The History Teacher
It takes a young teacher time to get to grips with the traditions of the school, and two girls seem anxious to help him out.

Mom’s Compromise
When a mother refuses to authorise her daughter’s school paddling, does that mean the girl will be treated differently than her friends?

Trouble in the Air
An airliner is diverted to a remote airport, tempting one crew member to take advantage of what she hopes will be lax customs officials. Unfortunately, she is caught with contraband in her luggage.

Future Justice
A look at how offenders might be dealt with in years to come.

Twice in Trouble
Returning late to school gets three girls in trouble, and not only once.

Exchange Visit
An English girl on an exchange visit to an American school finds things aren’t quite the same as back home.

The Old Way
He might have been passed over for promotion, but Arthur knows what’s best when a girl assaults a teacher.

A Bad Choice
When two girls are suspected and one owns up, the headmaster has no choice but to punish her, despite his suspicions.

Publisher’s Note: While many of the stories in this book share a school setting, it is made clear in all of them that the characters are over the age of eighteen.

“Would you like to get it over with first, Elizabeth?” Annabelle Carter asked.

“I don’t mind, miss,” Elizabeth replied, her voice so hushed it could hardly be heard.

“Okay, then I’ll do Jennifer first.” As the track-suited teacher stepped over towards Jennifer’s bed at the end of the room, Elizabeth began to rebuke herself for not having had the courage to accept her punishment first. Now she would have to remain bent over the bed for longer, and listen to her friend being whacked in the certain knowledge she would then have to face her own punishment.

The room had suddenly become very quiet. Jennifer, aware the young teacher had taken up a position behind her and to her left, braced herself for the first whack that she knew could now be only moments away.

“Aah!” A sudden stinging sensation spread right across the eighteen-year-old’s soft, pink buttocks as the sound of the large leather-soled slipper landing on her bare bottom reverberated around the still room. Jennifer braced herself for the next stroke.

“Aaah!” Again, that hot, painful, nettle-like stinging spread its way all across the milky white surface of the teenager’s bare backside, and her eyes watered. Jennifer flicked her head to clear the light brown hair from her dampening cheeks and steadied herself again.

“Uuuh!” The leather sole of the large slipper crashed across her already sore bottom, and a tear rolled down Jennifer’s face.

2013-07-11
+admin
Previous: His Firm Guidance by Constance Masters
Next: Obediently Yours by Bella Jackson