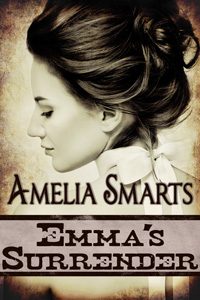 When twenty-year-old Emma Brookstone arrives in the town of Bannack, Montana, she seeks out the local marshal, intending to enlist his help in uncovering the truth regarding her father’s murder two years earlier. Upon meeting the marshal, however, she is shocked and dismayed to discover that he is none other than the man who gunned her father down that fateful night.

Though Clive Brookstone was an evil man who needed killing, the knowledge that he left a young woman orphaned tore at Nathan Haskin’s conscience from the moment he pulled the trigger, and he has secretly provided for Emma’s needs since that day. Certain that hearing about her father’s legacy of lawless violence would break her heart, he concealed it from her, but now that she has returned to Bannack her persistence eventually prompts him to tell her the full story.

To make matters more complicated, Nathan finds his desire to protect Emma quickly growing into a powerful need to tame and possess her, and when her foolish behavior puts her safety at risk he doesn’t hesitate to take her in hand and spank her soundly. His stern chastisement leaves her furious yet helplessly aroused, and it isn’t long before he claims her hard and thoroughly.

In her heart, Emma knows what Nathan tells her is true—that her father’s death was just—but writhing in ecstasy as she is utterly dominated by the man who killed him fills her with shame nonetheless, and she does her best to deny her lust for the handsome marshal. Will the day ever come when she can put aside the past and surrender herself fully to the man she once hated?

With her eyes no longer watching him, she was caught by total surprise when his mouth clamped over her clit and sucked. She cried out, overcome by the strong sensation she was helpless to stop. His hands still on the backs of her thighs, he spread her legs wider and dipped his tongue into the wet cavern his finger had filled previously. She circled her hips wantonly, so desperate to latch onto whatever was just out of her reach.

Somehow, another moment of sanity intercepted her wild lust. She reached down, twined his thick blond hair into her fist and tore his face away from where it was buried between her legs. “You can’t do this!” she snarled at him. “I am not your… plaything!” she spat. “Or your pet. You can’t command me and expect me to roll over like a dog.”

His eyes narrowed into a predatory stare, and he chuckled darkly. “I can, I will, and you should know better than to come between a wolf and his meal, pet,” he said, using her own word.

He drew himself up so that he stood towering over her. With a callused hand, he grabbed an ankle, flipped her on her stomach, and gave her bottom a smack. She let out a surprised squeal when his hand fell again, stinging the same place. He continued to strike the flat of his palm in measured splats across each cheek. She yelped at each swat but enjoyed the punishment so much that she pressed her bottom into his hand every time it fell. How completely he had mastered her, when even the pain he inflicted felt like pleasure.

His victorious laugh filled the room. “Oh, you’re a naughty one, aren’t you, pet?” he said as his palm crashed against her bare skin for the final time.

When she didn’t answer, he wrapped his hand around her hair and tugged her head up so that they were cheek to cheek. “Aren’t you?” he growled.

“Yes!” she gasped, her scalp and bottom tingling, her stomach somersaulting.

The stubble of his beard scraped her cheek lightly as he moved his lips to the shell of her ear. “Say it,” he said in a harsh whisper. “Say, ‘I’ve been a bad girl, trying to deny what I want to the man who can give it to me.’”

She parroted it back to him, no longer trying to fight. Now all she wanted was for him to continue all the wicked, wonderful things he was doing.

She groaned and uttered words that had never before passed her lips. “Fuck me, please.”

Satisfied with her obedience, he flipped her back around and resumed devouring her cunny, licking and nipping, taking her to the very edge once again. He rose up, and his hand took the place of his mouth, rubbing between her legs for several swirls until he paused to lift it and bring it down in a hard pat. She nearly arched off the bed from a sudden smack to her most sensitive body part. He was merciless. Again his hand fell, striking her clit and swollen lips.

“This wet cunny is getting a spanking because you were dishonest about what you wanted, but then I’ll fuck you, baby.”

2017-01-01
+admin
Previous: Rhett’s Revenge by Maggie Carpenter
Next: A Concubine for the Trillionaire by Emily Tilton