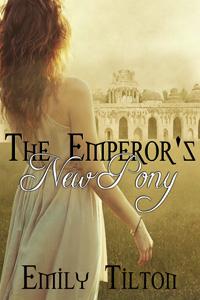 Bound by oath to serve Princess Edera as he once served her father, since the old king’s passing it has been Lord Ranin’s sacred duty to keep the naïve, headstrong eighteen-year-old safe and her realm free. But when Edera ignores his dire warnings and rides out to meet the tyrannical Emperor Comnar on her own, her foolishness has a terrible price. Seizing the opportunity to conquer her lands without a fight, Comnar takes Edera prisoner.

Ranin sets out to treat with Comnar and bring her home, but the emperor shows no interest in negotiations. Instead, he shows Ranin his stables, filled not with horses but with beautiful women from conquered nations, fillies to be trained and displayed for the emperor’s pleasure. To Ranin’s horror, Edera and her ladies-in-waiting are the newest additions to Comnar’s stables, and like all the other fillies they have been stripped of their clothes and now wear nothing but bridles, harnesses, bits, and horsehair tails.

To complete the humiliation of his captured enemies, Comnar commands Ranin to personally train Edera for her new role as a filly, informing him that if he does not train the princess himself, a far harsher trainer will be found for her. With no other choice, Ranin sets out to master the princess, training her with a firm hand, as he would a young filly in the royal stables of his homeland where he was once the master of horse.

Despite her great shame at her treatment, Edera is secretly comforted by Ranin’s control and attention. She soon finds herself longing for her new master to ride her long and hard, and though he struggles against himself, Ranin finds in time that he can no longer resist his little filly’s charms. But when the occasion arrives to perform in front of the emperor and his people, will Edera’s training have been sufficient? And can Ranin ever free Edera from Comnar’s tyranny, or will his princess spend her life in the emperor’s stables?

Hardly even knowing how he did so, Ranin dismounted, and began to walk toward the six figures at the palace gate. It was only too true. The young women—Edera, Melisan, Adilan, and Alira, the highest born and most beautiful ladies of Amidia—stood naked but for the strange harnesses they wore. Thin straps of dark brown leather enclosed their heads in a sort of bridle and thicker straps bound their torsos and their hips.

The cruel harness maker had shamefully arranged the straps so as not to cover a girl’s breasts or her loins, and configured them so as to bind her arms to her sides, forbidding her thus to hide her secret places from the sight of all. Worse, to his helpless, aroused excitement, Ranin could see that someone had shaved all four of the noble girls between their lovely thighs, giving a view of their tender little cunts. To his dismay, Ranin found he had terrible difficulty averting his eyes from that view, and above all from the loins of Princess Edera.

Next to them stood two men, one on either side of the girls. The man on the left must be a counselor of the emperor, from his grand ceremonial robes of silk and cloth-of-gold, but the man on the right wore the sort of simple clothing of homespun fabric and leather that a stable master might wear, and in his hand he held four long leads that ran to the girls’ harnesses. Then, with a shame and a hardness that shamed him even more, Ranin saw that the girls had bits in their mouths, to complete their tack: the leads in the stable master’s hand were hooked to the thick straps fastened around the back of the head, which held the bits in the girls’ mouths. Gleaming bronze rings attached the bits to the girls’ bridles; those rings could only be meant for hooking on reins, and the images that rose in Ranin’s mind seemed for long moments to threaten to drive him mad.

Ranin kept walking, helplessly shaking his head as he did so, trying to drive the fancies out of his mind. Now he could see the eyes of his princess and her ladies-in-waiting, and to his grief he saw that Edera wore a look of shame so great that even the loss of a kingdom, he thought, could not fully justify it.

Suddenly the stable master said, in an authoritative tone, “Fillies, present your tails.”

Edera gave Ranin a look at that seemed to say that she could hardly bear to meet his eyes, and then, along with her ladies-in-waiting, she turned to show that the emperor had imposed upon them a humiliation so great Ranin could scarcely comprehend it: from each girl’s bottom emerged a fine horsehair tail, which must be affixed to a wicked device that impaled her there, where a highborn girl must feel the greatest shame for a man to see her, let alone to see her wear such a degrading adornment. Edera’s tail was of snow-white hair, like the tails of the most prized Amidian mares, while her ladies wore tails of coal black.

Clearly the girls had already been trained in certain aspects of this shameful service. After they had turned to show Ranin their shapely backsides with the tail, they bent over and placed their hands on their knees. They arched their backs to present their rumps much more fully, at the same time turning their heads to look over their left shoulders at him. Now Ranin saw upon the girls’ bottoms red marks that could only have come from the quirt with which the stable master must have trained them, and which explained their obedience. That quirt, Ranin now saw, hung at the man’s belt, a double length of leather attached to a braided handle.