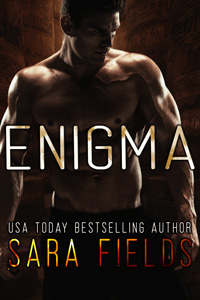 An alpha could not tame her. Now she will kneel before a god.

For endless ages I’ve kept this world in balance, and over the centuries countless women have writhed and screamed and climaxed beneath me. But I’ve never felt the need for a mate.

Until today. Until her.

When I touch her, she trembles.

When I mark her defiant little bottom with my belt, her bare thighs glisten with helpless arousal.

When she lies next to me blushing, sore, and spent, my lust for her only grows stronger.

The world be damned. I’m going to claim her for myself.

Publisher’s Note: Enigma is a stand-alone novel which is the fifth entry in the Alpha Brotherhood series. It includes spankings, rough sexual scenes, intense and humiliating punishments, and strong D/s themes. If such material offends you, please don’t buy this book.

The spanking started to get harder and faster. Each spank felt deeper, the sting radiating into my core and my pussy began to convulse with each and every one. I soon realized that he had been being gentle before and it was time for the real lesson to begin.

“I’m going to enjoy every single second of this until you break for me.”

“I will never break for you,” I vowed, and his palm begged to differ. It was hard and every slap stung with vicious intent, but the rising heat inside my body fought against it. The initial biting pain was cruel, yet the pleasure that soon followed made me question if it was worth it.

It was hard to take, but in the end, I realized that I didn’t have much of a choice. He was so much bigger and more powerful than me. The intensity of his alpha was staggering. Perhaps he was an enigma.

Maybe he was even a god.

My pussy pulsed heavily, and I suffered under his punishing hand. He ensured to spank every last inch of my backside from the tops of my cheeks to the middle of my thighs but that wasn’t the worst of it.

Using one hand, he spread my bottom cheeks open and spanked between them. I squeaked in shock at the sudden sting, but I moaned in shame as soon as he paused and placed the flats of two fingers directly over my bottom hole. He lifted them and struck me there. I cried out at the fiery flash of pain but was soon overwhelmed with the mortifying pleasure that came with it.

He released my bottom cheeks and glided his palm over top of my scalded flesh. I found my body reacting to his touch, rising to meet his hand even though he’d just spanked me hard enough to make me cry out.

He edged his fingertips along my thighs, just barely grazing my wetness and a heated flash of electricity skittered across my skin. I panted for several moments, wanting to close my legs and yearning to spread them wide just for him.

I had lost my mind.

“You know what’s happening, don’t you, Fenra?” he asked.

I pressed my hands to my face, wanting to hide from whatever this was for the rest of time.

He lifted me up off his lap and placed me on my feet in front of him. My hands raced backwards to cup my punished ass, and he grinned mercilessly at my pain. My bottom burned, but my core was blazing that much hotter. My nipples were so painfully hard that they hurt, and he reached for them with both hands.

“You can fight your nature all you want, but eventually your heat will claim both your body and your mind,” he continued.

I hated that he was right. It was what I was meant for. I was fated to lose myself in the throes of instinct just like an animal.

I turned my head and he smiled.

“I think I’m going to take my time with you, Warrior Queen. I will not force my way inside you. I’d much rather you beg me to fall apart on my cock,” he purred, and I shook hard at his pronouncement.

“You will,” he demanded, and he growled. Loudly. My core cramped so hard that my body pitched forward, and a rush of slick dripped down my legs. “It is only a matter of time.”