Don't Miss
Home / Blog / Enslaved for Their Use by Ivy Barrett

Enslaved for Their Use by Ivy Barrett 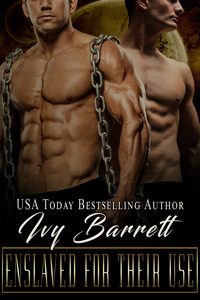 Lorna Mortenson has been looking after her family since her parents died while she was still a teenager, so when her sister is kidnapped by aliens of the rogue Yashonty species she considers it her responsibility to bring her home, even if it means setting herself up to be abducted as well.

Though she succeeds in getting herself taken captive, once Lorna is in Yashonty custody she quickly discovers that she will be not only a prisoner but also a slave, and her body is now the property of two masters who intend to use her as thoroughly and shamefully as they please.

Despite her best efforts to carry out her plan, Lorna’s attempts to keep in contact with Earth merely earn her a painful, humiliating punishment. Even with her cheeks blushing crimson and her bottom sore inside and out, however, her helpless arousal is undeniable, and she cannot help begging her masters to claim her properly. But will she ever be more than just a slave to them?

Publisher’s Note: Enslaved for Their Use is a stand-alone novel which is the seventh book in the Ventori Masters series. It includes spankings and sexual scenes. If such material offends you, please don’t buy this book.

Her bottom cheeks were pulled apart, and she gasped, trying to look back. She’d been so focused on Moxtel that she’d momentarily forgotten Belton was behind her. Moxtel lightly grasped the back of her neck, silently reminding her to remain still. Something smooth and slick rubbed against her hidden pucker. That’s right. Belton was going to warm her up. Calming herself with a slow, deep breath, she relaxed her muscles inside and out. Belton had fucked her ass several times, but Moxtel had only taken her mouth or pussy. Was accepting Moxtel’s massive cock into her ass going be part of her punishment? A tingle dropped down her spine, making her clit twitch, but she wasn’t sure if anticipation or dread had triggered the reaction.

“If you believe any of this is going to be enjoyable, you’re mistaken,” Moxtel warned.

“The gel covering this plug isn’t ordinary lubricant. It’s called ayeetis,” Belton told her. “The compound causes a variety of sensations, all of them unpleasant. However, the ingredients are harmless and leave little residual tenderness once the discipline is finished. That’s why it’s used so widely in our star system.”

Distracted by the stretching caused by the plug’s insertion, she barely noticed the gradual increase in temperature. Belton drove the plug deeper into her ass with slow yet steady pressure, opening her reluctant body as it filled her up inside. She stubbornly held still and focused on relaxing, determined to submit to his will. But the warmth swelled and churned, quickly transforming into a persistent sting.

“Has this been tested on humans?” Despite her determination to submit, she squirmed, rocking her hips and arching her back. “It burns!”

“It is perfectly safe,” Belton insisted. “And it’s meant to hurt. This is a punishment.” He drew the plug back then pushed it even deeper. She cried out as the burning increased. “This is what happens to bad girls. They get fucked with fire.”

Again and again, he used the plug to stretch and torment her. She yelled and screamed, tossed her head and moaned, but none of it made any difference. The burning deepened and receded, creating echoing pulses in her core. She needed his cock, or Moxtel’s pounding into her, distracting her from the misery—and shame. She’d disappointed them, betrayed them with her selfish actions. She hadn’t cared that she put them at risk.

Tears flowed freely down her cheeks, and her screams turned to harsh sobs. Belton finally slowed, then pushed the plug all the way in and left it deep inside her. “You will wear this as a reminder of your mistakes until I take it out. Do you understand me?”

“Yes, Sir,” she sobbed, feeling wretched, and knowing her discipline was far from over. This was just the warmup. Belton and Moxtel switched places. She looked up at Belton through her tears, but couldn’t bear the disappointment in his gaze. “I’m so sorry, Sir. I will never do anything like that again.”

Belton brushed her hair back from her face and pressed a kiss against her temple. “We’re going to make sure of it.”

Moxtel traced her slit with the tip of one finger, then circled her vaginal entrance. “You’re so fucking wet, sweet slave, your juices have pooled on the railing between your knees. Shall I fuck you before I punish you?”