Examined and Corrected by Emily Tilton 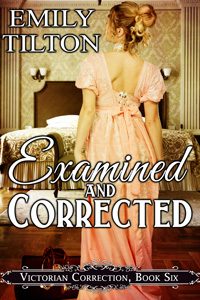 After she is caught in the midst of a scandalous indiscretion, eighteen-year-old Ginevra Audley is soundly birched in front of her finishing school classmates and then brought to Dr. Reginald Brown for further correction.

She is made to strip completely and display herself shamefully before the stern doctor, and when she is disobedient during the intimate, humiliating examination, Ginevra is punished in the most embarrassing of ways. Once Dr. Brown is finished with her, Ginerva is handed over to a handsome young gentleman who will train her thoroughly and then take her as his bride.

Publisher’s Note: Examined and Corrected is the sixth entry in the Victorian Correction series. It is a short story which includes spankings and sexual scenes. If such material offends you, please don’t buy this book.

“I do not wish to summon the matrons, Miss Audley. Please lay yourself down on the bench, so I may punish you. You have no choice in the matter, in the end. My trainer will enter your bottom, and you will learn the price of disobedience. The only decision you may make is how you will behave, knowing these things.”

The girl gave a little whimper, and the crease in her forehead grew very deep. Crystalline tears appeared again in the corners of her eyes. She turned to her left to face the bench.

“Bottom to me,” he said, as she started to assume the proper position. “That’s right.”

She struggled against the sturdy belt for a moment, clearly out of surprise rather than defiance. Dr. Brown didn’t comment on it, but went about securing her wrists to the forward corners of the bench and her knees to its legs, spreading them as he gathered they had been spread for her birching in the schoolroom.

The full extent of the torment visited by that chastisement from Mrs. Heathers now became visible. Miss Audley’s bottom and upper thighs bore a patchwork of crimson and purple that told indeed of vengeance taken for a pleasure the doctor thought the schoolmistress had never known despite living for five years with a husband before his death in India.

“We will determine the current state of your buttocks and upper thighs before we proceed with your punishment and your questioning, Miss Audley. You will learn as your stay with us grows longer that we take as precise an approach to the discipline of young women and to the relations of the sexes as modern medical knowledge permits.”